‘A Killing in November’ by Simon Mason 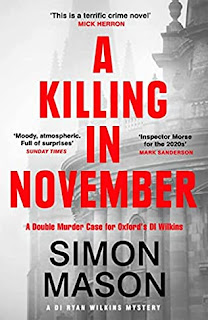 This is the first of what promises to be a fascinating series.

A young woman is found strangled at Barnabas College, Oxford in the Provost’s office. The case calls for considerable tact and DI Ray Wilkins, a graduate of Balliol College is assigned the case. However, because of a mix-up in their names, on his first day serving with Thames Valley CID, DI Ryan Wilkins is called to investigate. Ryan is far from your conventional policeman. The 27-year-old, who looks and acts like some teenage chav dressed in tracksuit bottoms and baseball cap and is no respecter of the privileged elite. It doesn’t take long before he upsets the pompous influential Provost.

The two DIs could not be more unalike. Ryan grew up on a trailer park, the son of an abusive alcoholic father, and has no social graces and has a scarred face, whereas good-looking Ray is from an affluent Nigerian family, who dresses well, is married to an adoring wife and who appears to have had every advantage in life. Ryan has arrived in Thames Valley from Wiltshire under something of a cloud after assaulting the Bishop of Salisbury and has definite anger management issues. Ray on the other hand is one of the force’s highfliers.

Both characters are well drawn and despite his constant swearing, it is hard not to like Ryan in no small part because of his relationship with his young son who he is bringing up on his own. I was also attracted by the Superintendent and her attempts to support Ryan as he digs himself deeper into trouble as the story unfolds.

The first problem for the two detectives is identifying the dead girl. This takes some time to solve but a variety of sub-plots involving a controversial billionaire Sheik al-Medina, a valuable stolen Koran, asylum seekers, human trafficking, sexual harassment and abuse all serve to keep the reader on their toes.

Simon Mason also establishes a great sense of place and both sides of Oxford – town and gown – are deftly drawn without undue overemphasis.

Reading an author, one has not come across before can be something of a mixed experience, but I can honestly say that I found it difficult to put this book down. It was compulsive reading. The ending was not what I expected, and I am intrigued to know how this series will continue although it seems that I will have to wait until January 2023 before I can find out!
------
Reviewer: Judith Cranswick

Simon Mason is an author of children's and adult books. His first adult novel, a black comedy entitled The Great English Nude, won the Betty Trask first novel award and Moon Pie was shortlisted for the Guardian Children's Fiction prize. Running Girl is his first story starring Garvie Smith. Simon lives in Oxford with his wife and their two children.