‘The Masks of Darkness’ by Patricia Hall 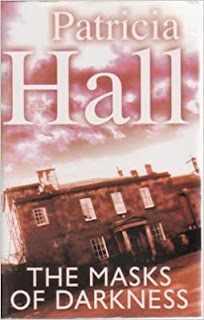 Published by Allison & Busby,
1 June 2003.
ISBN: 978-0-74900-669-3 (HB) Following her divorce, Jay Morton decides to return to her hometown of Pendle Bridge in Yorkshire, where her sister Sue still lives with her husband and two children.  Jay feels that it will be good for her daughter Kate to have her cousins close by.  She secures a position helping to set up a museum at Pendle House, which was formerly a children’s home some twenty yearspreviously.

However, Jay’s new life does not run smoothly - Kate has trouble settling into her new school; she is teased because of her southern accent. She makes friends with Sonja who is from Kosavov and is also teased for her funny accent. Matters take a disturbing turn when Jay suspects that she is being stalked. Even more disquieting is her sister Sue’s husband Chris, who was formerly Jay’s boyfriend and seems keen to return to their former relationship.

Things at work are not much better. The artifacts which will form the exhibits for the new museum have for the past twenty years been stored in the attics of Pendle House. Although the attics were supposed to be locked it is clear that someone had been there, as some extraordinary original African masks have been unwrapped.  Added to which barely a day passes without two of the trustees being present under one pretext or another. As one of these interfering trustees is George Hateley, Chris’s father, Jay finds herself in an awkward position.

The story is narrated by two voices, Jay Morton and Donna Latham - Donna was one of the children who had lived at Pendle House twenty years ago, she was the best friend of Mags Davies who was murdered, and for which Kenny Bairstow was charged and imprisoned.  But Kenny was only ninepence to the shilling!

Whichever way she turns Jay is pulled deeper into the events of twenty years ago. She reports her fears and the stalking incidents to DCI Peter Shipley, but he dismisses her fears as she has no actual evidence. And then another child goes missing.

I really enjoyed this book. The characters were all well-developed.  The writing was crisp and the story moved along at a good pace. In all a fascinating mystery that held my attention as the layers were slowly stripped away to reveal the truth. I read the book in one sitting unable to put it down.  Highly recommended.
----
Reviewer: Lizzie Hayes
Patricia Hall is the pen-name of Maureen O’Connor - she has written fifteen books featuring reporter Laura Acroyd &PC Michael Thackeray. Patricia Hall is the pen-name of journalist Maureen O'Connor, who was born in 1957. She was born and brought up in West Yorkshire, which is where she has chosen to set her acclaimed series of novels featuring reporter Laura Ackroyd and DCI Michael Thackeray. She is married, with two grown-up sons, and now lives in Oxford.