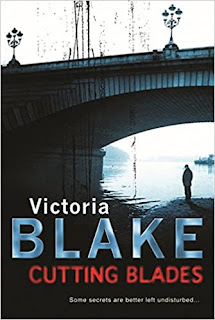 Sam Falconer, PI and sometimes self-defense instructor, is sure she is being watched; And that the watcher is Geoffrey Falconer, her father.  Since finding the body of a young girl Jenny, and learning that the father she had idolised and thought had been killed in Oman in 1974 is actually alive, Sam has been having flashbacks and nightmares and is now seeing a therapist, Reg Ellison.

Asked to investigate the disappearance of a talented rower from Oxford University, Sam is keen to throw herself into something to take her mind off her paranoia that is centred on her father.  As she delves into Harry’s life she discovers that he is a gifted rower but with a troubled family background, and that the rowing camaraderie is a sham behind which there is a shimmering hot- bed of jealousy and resentment.

Tom King, the OUBC coach, Alan Knowles, ex-policeman and Gerry Doyle, a locksmith, are those she trusts in the investigation - but can she really trust anyone?   Sam is a complex person - in this the second book another layer is peeled away and I look forward to the next book in the series.
-------
Reviewer: Lizzie Hayes

Victoria Blake is the author of three highly acclaimed crime novels featuring female private eye Sam Falconer - Bloodless Shadow, Cutting Blades, Skin and Blister, Jumping the Cracks. She spent her childhood in Queen's College, Oxford, where her father was Provost, and is also a qualified solicitor who has worked in publishing and bookselling.