‘The Shortest Way to Hades’ by Sarah Caudwell 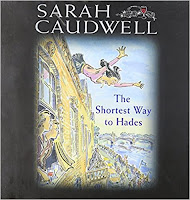 When Professor Hilary Tamar receives a message from former pupil Timothy Shepherd to come to London as soon as possible -he will provide lodging and dinner, Oh! And it has something to do with a murder. Professor Tamar does not tarry, the offer of free board and dinner is enough to tempt but ‘something to do with murder’ really clinches the matter. A quick telephone call to get some details elicits the information that it relates to the Remington-Fisk application.

Some three months earlier the members of the Nursery (the inmates of 62 New Square, Lincoln’s Inn) had been instructed in connection with an application under the Variation of Trusts Act, or as Cantrip put it “We’ve got to zoom along to old Loppylugs tomorrow to get him to do a trust bust” As Hilary says - Cantrip was educated at Cambridge.

The crux of the application is to save their clients a large sum in capital transfer tax and time being of the essence, as Lady Frances Remington-Fiske is in her late eighties and alas not enjoying good health.  The family agree to rally around the heiress, the gorgeous Camilla Galloway in the court application, with the exception of Cousin Deirdre, known in the family as Dreary Deirdre. After some fancy footwork by her Barrister Julia Larwood, Deirdre agrees to append her signature to the application.

And now three months later Deirdre is dead. Why not the heiress? muses Hilary Tamer.

Eva Haddon does her usual wonderful interpretation of the characters. Her Julia and Selena are marvellous, she conveys just the right tone for both characters, and her Cantrip is spot on.  In fact, she is brilliant with all the characters, and it is her reading that adds so much to my enjoyment of these books. This sadly is the last of the four books, if only there were more. Sigh!
-------
Reviewer: Lizzie Sirett
Other books in the series are Thus Was Adonis Murdered, The Sirens Sang of Murder and The Sibyl in her Grave. 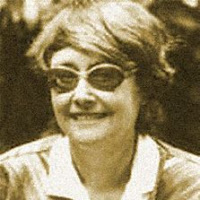 Sarah Caudwell (1939-2000) was the pseudonym of Sarah Cockburn. She studied law at St Anne's College, Oxford and, practised as a barrister for several years in Lincoln's Inn. She later specialised in international tax planning at a major London bank. She is best known for a series of four murder stories written between 1980 and 1999, centred on the lives of a group of young barristers practicing in Lincoln's Inn and narrated by a Hilary Tamar, a professor of medieval law. She died in January 2000.