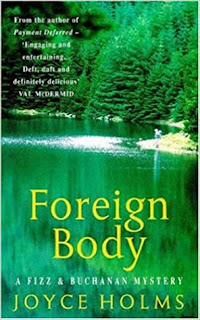 Tam Buchanan recovering from a gall bladder operation, finds himself convalescing in a cottage, owned by Fizz's grandfather, in the Scottish Highlands.  Once there he realises that he has once again been manipulated by Fizz to be on the spot to investigate the disappearance of an old lady called Bessie.

Like the police and the local inhabitants, Tam is inclined to believe that 'old Bessie', in her eighties, has fallen in the Loch. The discovery of a second body indicates possible foul play.

Suspecting that Fizz is engaged in further manipulations at his Edinburgh Law practice, where his father, long overdue for retirement is standing in for him, and the attentions of Gerda, who runs the pony trekking club, not to mention Selena, Tam convalescence, proves interesting.

The mystery is intriguing, the touches of humour brilliant, striking just the right note and adding to the readers enjoyment of the characters.  There is one marvellous scene between Grandpa and Buchanan, when Grandpa decides to share with Tam his wonderful collection of malts. Their slow slip into inebriation is subtle; they start off with a sensible exchange of views which gradually becomes more disjointed and bizarre as they sip and savour, culminating with Grandpa’s observation of “My God, Tam, that’s the truest thing I ever heard in my life…What was it again?”

We are introduced to some great characters, Grandpa and Auntie Duff and I know someone just like Selena. The relationship between Buchanan and Fizz is wonderful - it sparkles. Highly recommended.
------
Reviewer: Lizzie Hayes
Other books in the series are Payment Deferred, Bad Vibes, Thin Ice, Mr Big,
Hot Potato.