‘The Keeper of Secrets’ by Judith Cutler 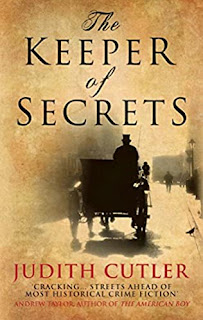 Set in the early eighteen hundreds, The Keeper of Secrets is written in first person and beautifully narrated by Paul Ansdell. Newly ordained, the Reverend Tobias Campion comes from a aristocratic family and was educated at Eton, before getting his degree at King's College, Cambridge. But Tobias wants to put all this behind him and keep it secret. It is not made clear why Tobias has broken with his Derbyshire family, particularly his elder brother who inherited all his father's wealth. But he did not envy him his three titles, his extensive lands or his wealth.

He arrives in St Jude's, his new parish in a Warwickshire village called Moreton Priory, accompanied by Jem, his groom who was his childhood friend. "Our friendship had even survived my time at Eton. But our ways had diverged when I went up to Cambridge and his becoming a groom set us irretrievably apart."

Campian spends the first night in his new parish at The Priory, home of Lord and Lady Ellham and their son. It is here he makes his first enemy when he saves a servant girl, Lizzie Woodman, from rape by a drunken aristocrat, friend of Lord Chartham heir to the title. Tobias settles in at the vicarage but beneath the quiet village life there is a troubling sense that all is not quite what it seems.

Tobias makes firm friends with Dr Edmund Hansard and Mrs Beckles; Lady Ellham’s housekeeper. The doctor too has a secret and loves Mrs Beckles from afar. Toby means to unite them, and himself with Lizzie Woodman. But Lizzie already has a beau and Jem has fallen for her as well.

Tobias is appalled at the living conditions of the poor and the way they are treated. In the particularly tough winter, he exhorts his parishioners "each week from the pulpit to share what little they had". And he sets up a school where villagers know there would always be warmth and a solid meal for their children. He is a humble man, he tells Dr Hansard, "To my governess, my school and my university, I owe my intellectual education, but it was from him (Jem) that I had my moral one. And yet he is now my servant, dependent on me for his food and clothes. I often think that he should be the clergyman, I the groom."

There are two suspicious deaths, and a mysterious attack on Tobias. When Lizzie disappears Tobias and Dr Hansard set about investigating what has happened, uncovering dark secrets as they go. Dr Hansard does most of the detective work but Tobias is an attractive character more interested in compassion than theology. At one point, Tobias reminds Lady Elham's housekeeper, Mrs Beckles, that "Here in Moreton St Jude I am a gentleman no more."

But she lifted her chin. "With respect, sir, being a gentleman has less to do with birth than behaviour ... Up at the Priory I see fine lords behaving like savages and working men as charitable and gracious as if they had been born with a whole canteen of silver spoons." "Mrs Beckles," Tobias replied, "I think you have just given a better sermon than I shall ever hope to do."

The Keeper of Secrets is an entertaining read. I hope we shall see the Reverend Tobias Campian and Dr Hansard again soon.
------
Reviewer: Sue Lord

Sue Lord originally studied Fine Art and Art History; her MA is in Creative Writing. She now, revues, teaches, mentors and script doctors. She lives in Somerset. Her favourite pastime is gardening.