‘The Arsenic Labyrinth’ by Martin Edwards 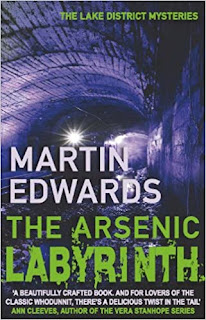 For historian Daniel Kind the move from the south to the Lake District has been a good decision, he is enjoying living in a small rural community but his partner Miranda who was the keenest on the move is becoming increasingly restless and has been making more and more trips to London. Daniel can see that the charm of the Lake District is beginning to lose its grip on Miranda and fears that the day may come when she leaves for London and does not return..

Having restored the cottage and garden Daniel turns to putting some money back in the pot, and is currently researching John Ruskin for a book, which leads him to Alexandra Clough and her father Alban Clough of Inchmore Hall, home to Cumbria’s Museum of Myth and Legend.

Meanwhile DCI Hannah Scarlett who heads the Cold Case Review Team, is investigating the disappearance of one Emma Bestwick, who left her cottage ten years ago and has never returned.  Re-interviewing the family Hannah is surprised to find a ‘let’s leave it be’ attitude from Emma’s sister Karen.  But journalist Tony Di Venuto from the Post has also raised the question of Emma’s disappearance, for what reason Hannah has yet to discover.

The story is told from several points of view, Daniel and Hannah, and a con man Guy Keonig who masquerades as Robert L Stevenson. As with the two earlier books in the series, the seemingly unrelated research by Daniel Kind for his book, and the cold case investigation, bring Daniel and Hannah into contact again.  Still in the background, although in the forefront of Hannah’s life, is her partner Marc Amos who is a second-hand book dealer and a great source of knowledge for Daniel in his research, but try as I might I cannot bring myself to like Marc Amos.

Martin Edwards was born 7 July 1955 at Knutsford, Cheshire and educated in Northwich and at Balliol College, Oxford University, taking a first-class honours degree in law. He trained as a solicitor in Leeds and moved to Liverpool on qualifying in 1980. He published his first legal article at the age of 25 and his first book, about legal aspects of buying a business computer at 27, before spending just over 30 years as a partner of a law firm, where he is now a consultant. He is married to Helena with two children (Jonathan and Catherine) and lives in Lymm. He is a member of the Murder Squad a collective of crime writers.  In 2007 he was appointed the Archivist of the Crime Writers Association and in 2011 he was appointed the Archivist of the Detection Club. He is a former chair of the Crime Writers’ Association and since 2015, he has been President of the Detection Club.