‘The Dark Eye’ By Ingrid Black 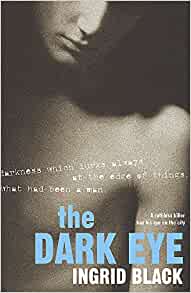 Responding to a call that someone is trying to kill him, Saxon, former FBI agent, now crime writer agrees to meet photographer Felix Berg at midnight at the Howth lighthouse.  Saxon is both wary and intrigued. Recently there have been several killings in the city of Dublin - all by a single bullet to the head - all apparently motiveless as no link can be found between any of the victims.  The killer has been dubbed ‘The Marxman’.

Following her ill-conceived agreement to meet with Felix Berg, Saxon finds herself caught up in the mystery of these seemingly senseless murders. The case is being handled by Saxon’s lover, Superintendent Grace Fitzgerald, but Saxon is not one to wait around while the police follow the correct procedures.

This is the second book in the series featuring ex FBI Agent Saxon, and it has as many twists and turns as her stunning debut The Dead. Highly recommended.
-------
Reviewer: Lizzie Hayes

Ingrid Black is the pseudonym of Eilis O'Hanlon and Ian McConnel, a husband-and-wife writing team who live with their family in Belfast, Northern Ireland. They are the creators of ‘Saxon and Grace Fitzgerald’, former FBI agent and Detective Chief Superintendent with the Dublin Metropolitan Police’s Murder Squad.
Posted by Lizzie at 13:12