‘Rattling the Bones’ by Ann Granger. 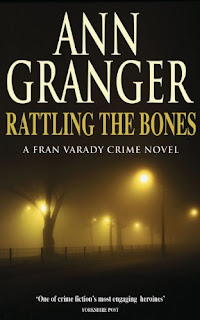 Fran Varady’s latest adventure sees her back in London. This time she is crusading on behalf of an old acquaintance: Edna the Bag Lady. Someone is watching Edna – someone Edna fears. Fran wants to know who and why. Ganesh, Fran’s friend, urges caution as ever, but Fran doesn’t do caution: ‘I’d have been scared too, if I’d had any sense. But . . . bad situations always draw me fatally towards them.’

But as Fran seeks Edna, so, it seems, does the watcher. Following advice from her friend Susie Duke (of Duke’s Detective Agency), Fran covers her (dyed) scarlet mop with a black Morticia Addams-type wig, follows Edna and is herself followed by the mysterious watcher who turns out to be also a private investigator, name of Duane. So far, all a bit odd but not all that ominous. Until, that is, Duane turns up in Susie’s office – dead. Further complications ensue involving Edna’s present safety and her past relationships.

Sadly, this is to be (apparently) Fran’s last outing. Scatty, warm-hearted and with a social conscience, always ebullient and optimistic despite the failure so far of her acting career, she is one of the most endearing of fictional sleuths. Maybe, in the post-fictional world, she really will achieve the starring roles she desires.
--------
Reviewer: Radmila May
Other Fran Varady titles: Asking for Trouble, Keeping Bad Company, Running Scared, Watching Out, Mixing with Murder. 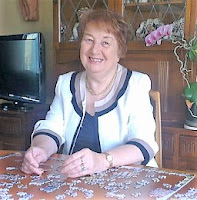