‘The Shape of Sand’ By Marjorie Eccles 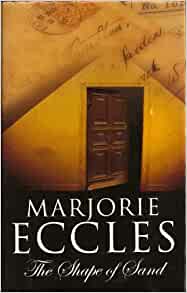 It is 1946 when Harriet Jardine is contacted regarding a shoebox of old papers that have come to light during the renovations of her childhood home Charnley, now acquired by a large City insurance company. It is now forty years since the scandal created by the disappearance of Beatrice Jardine after a party celebrating her birthday, but still the mystery remains. What did happen to Beatrice?

Harriet, eldest daughter of Amory and Beatrice Jardine, decides to read the papers and in particular her mother’s journal which is amongst them, to see if even after all this time she can determine from them some clues as to why her mother disappeared on that fateful night in the summer of 1910.

The world of the Jardine family in the Edwardian era is privileged, it is a graceful life, Beatrice Jardine, is still an incredibly beautiful woman, has four children Marcus, Harriet, Vita and Daisy.  Present for her birthday party are close family friends - Bertie engaged to Vita, Kit of whom Harriet has high hopes, Lord Wycombe, and Valery Iskander, an acquaintance from Beatrice’s visit to Egypt some eleven years previous.  Into this group comes Rose Jessamy, an artist who is to redesign a wing of the house.

Harriet is certain that the clue to her mother’s disappearance lies in her trip to Egypt, but before she can pursue this she is contacted by the builders to say that the mummified body of a woman has been found in the house, and the investigation is no longer just Harriet’s.

I have read several of the books in the series featuring Chief Insp Gil Mayo and I have enjoyed them all, but in my opinion this book stands out as by far the best work by Marjorie Eccles to date. The insight into the lives of the characters living in a different world is enthralling, transporting the reader back to that gracious time - well gracious for the rich and privileged, before two world wars altered that way of life forever.   I urge you all to read this book for both the writing which is beautiful, and the mystery that kept me baffled to the end. Highly recommended.
------
Reviewer: Lizzie Hayes

Marjorie Eccles was born in Yorkshire and spent much of her childhood there and on the Northumbrian coast. The author of thirty-three books and short stories, she is the recipient of the Agatha Christie Short Story Styles Award. Her earlier books featuring police detective Gil Mayo were adapted for the BBC. Her most recent series is set after the Great War and features DI Herbert Reardon. There are five books in the series. She has also written a number of standalone books. She lives in Hertfordshire.