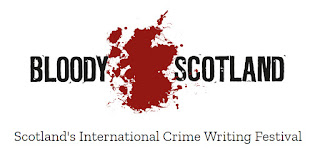 The Bloody Scotland Book Club evolved out of lockdown when the board realised how much crime fiction fans enjoyed chatting to each other outside the Festival and how easy it was to engage with the Bloody Scotland audience in a virtual world.

Although it will never replace the joy of being together at the Festival itself, The Bloody Scotland Book Club successfully keeps the Bloody Scotland buzz going throughout the year and has established itself as a crime fiction highlight at the end of each month. Over 2000 people have signed up for The Book Club which broadcasts live on Facebook and on catch up on YouTube.

The first Book Club launched on 31 March 2021 hosted by author and Bloody Scotland board member, Craig Robertson and featured four guests – journalist Jane Hamilton, blogger Mary Picken, podcaster Zoe Venditozzi and bookseller Simon Lloyd with a reach of 170. By February 2022 the Book Club reach had increased to over 1100.

The virtual Book Club ranges from new releases to classics. The 1st Anniversary edition will focus on classic, Get Carter by Ted Lewis; historical crime, Daughters of Night by Laura Shepherd-Robinson and the first in the international bestselling Rebecca Connolly series Thunder Bay by Douglas Skelton.

The 2022 Bloody Scotland International Crime Writing Festival will celebrate its 10th Anniversary from 15-18 September 2022 in the historic town of Stirling. Please note that for the first time the festival will begin on the Thursday with a reception, torchlit procession and presentation of the McIlvanney Prize and Bloody Scotland Debut Prize concluding on Sunday afternoon. We hope to see you there but meantime do join us to celebrate the 1st Anniversary of The Book Club