‘One for Sorrow’ by Helen Fields 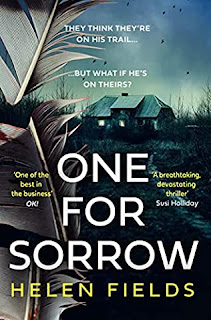 Edinburgh is a big city, and every big city has its dark side – but surely the Scottish capital was never this dangerous when Rankin was taking down the bad guys. Under DCI Ava Turner the mean streets have become a whole lot meaner.

In this, the eighth in this high-octane series, there’s a bomber at large. But this is no ordinary bomber. His attacks have an imaginative, almost artistic flair, albeit a rather gruesome one; and the explosions are very specifically targetted. A gift for a psychological profiler, one might think, and indeed, the help of one is enlisted.

An additional complication for Ava Turner is that she seems to have acquired a personal life – not that she pays it much attention as the investigation progresses. Her closest friend Natasha has been undergoing cancer treatment, and both Ava and her drop-dead gorgeous sidekick DI Luc Callanach have moved in with her to care for her as she recovers. Fortunately for Natasha, the treatment seems to have been successful, because before long Ava is running true to form – forgetting to eat, working until she drops, then sleeping on her office floor when she sleeps at all.

Interleaved with the halting progress of the investigation is another story: a young woman is being hounded by an obsessive and narcissistic ex-boyfriend who cannot believe any woman would dump him. Her family try to protect her, but it becomes a downward spiral as both police and law let her down.

Once again Helen Fields has created a plot in which the stakes are so high that tragedy is the  inevitable consequence. Several regular characters reappear: DS Lively, who lives up to his name; the redoubtable Superintendent Overbeck, abrasive as ever but also showing a rare human side; man-mountain DS Pax Graham; and of course Natasha and Luc Callanach. Every single character, major, supporting and bit part player, lives and breathes, with flaws and plus points like real human beings – Fields’s great strength. Even Edinburgh comes to life under her sure hand.

The culmination of the relentless campaign of violence is as unexpected as it is inevitable, and there’s a vicious twist on the last page or two that will make you gasp with horror and astonishment. Trouble dogs DCI Ava Turner footsteps, and this time it’s the worst kind – but you’ll want to keep reading to see how this dedicated and capable but still vulnerable heroine works it all out.
------
Reviewer: Lynne Patrick

Helen Fields can be found on Twitter @Helen_Fields for up to date news and information. A former barrister, Helen now writes Scottish set crime. Her next book Perfect Prey is due out on 27 July 2017. She lives in Hampshire with her husband, three children