‘Sick As A Parrot’ by Liz Evans 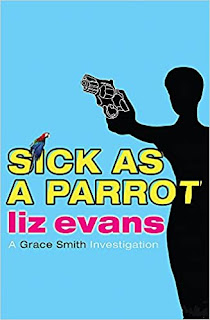 I loved this book.  I love Grace Smith. I haven’t laughed as much as this since I read the early Janet Evanovich books.

Grace is a self-employed PI at Vetch International Investigations. It sounds a grand place, but the boiler’s broken and it’s freezing, and the plumber is being evasive. So, when Grace is asked by Hannah Conti to prove that her mother Alison Wynne-Ellis didn’t murder her schoolteacher, Grace leaps into action. Anything to get warm.

She soon discovers that there are people that would rather she didn’t dig into this case, which was closed nineteen years ago.  In addition to the obstruction of a high -ranking police officer and his wife, she gets conned by the owner of The HappyBurger Bun into baby-sitting a disturbed parrot with a drinking problem.

Whilst tracking down anyone connected with the case, one of the arresting officers, Declan O’Hara, pops up.  Good looking, charming and helpful, Declan seems content to let Grace do the interviewing. Although that seems a little strange to Grace, he is a great cook.

As if she hasn’t enough problems, every time she arrives home, she finds drunk cop Terry Rosco lying on her doorstep. Terry is having marital problems and is trying to move into Grace’s spare room while he solves them. Over her dead body. Which is quite possibly - it appears that someone is trying to kill her.

Highly, highly recommended. Put this on your ‘Must buy list.
------
Reviewer: Lizzie Hayes
Earlier books in the series are Who Killed Marilyn Monro, JFK is missing, Don’t Mess With Mrs In-Between and Barking.

Liz Evans, Aka Patricia Gray has worked in all sorts of companies from plastic moulding manufacturers to Japanese banks through to film production and BBC Radio. She was born in Highgate, went to school in Barnet and now lives in Hertfordshire.