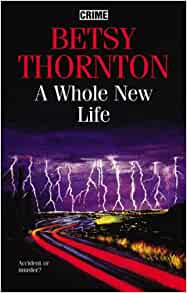 
When Jenny Williams dies in a car crash, it looks like a simple case of her losing control of the car, but an autopsy reveals traces of poison in her system.

Her husband Jackson is a professor of English and following some rumours from so-called friends he is arrested for her murder.  His next door neighbour Ruth is sure that he is innocent and enlists the help of a supposedly hotshot lawyer Stuart Ross.  But Stuart’s last famous case is some years behind him.

Unaware of the situation, Jackson’s daughter, whom he hasn’t seen since she was a small child, turns up on a surprise visit.

Initially I thought that the main character was Jackson, a man accused of the murder of his wife, whom I assumed must be innocent since there seems to be so much evidence against him.  But Jackson seemed rather unprepossessing, so I thought that the main protagonist must be Ruth, the concerned neighbour - and then I thought it must be Mara, the long lost daughter. In fact, it’s a whole bunch of very ordinary people faced with a murder in their midst and doing their best to carry on and find out who did kill Jenny Williams.

In the course of their ferreting about they each uncover oddities about Jenny’s life which they don’t all immediately share with each other, some understandably as Tyler, Ruth’s son, is where he shouldn’t be when he observes what he observes. Chloe Newcombe does make an appearance in this book, but she is not a main character.

It’s a good story, has some great twists and includes a nice touch of love interest. I really enjoyed it. A book with some good characters and a good plot and some very nice turns of phrase.  I look forward to the next.
--------
Reviewer: Lizzie Hayes
Other titles High Lonesome Road, Ghost Towns, The Cowboy Rides Away, Dead For The W

Betsy Thornton was born in Wilmington City, North Carolina. She graduated from Ohio Wesleyan University with a degree in English, married, and lived in New York City. She was employed for fifteen years in an Attorney's office in Arizona, where she worked as an advocate for victims of crime. She has written eight mystery novels, all but one of which feature her main character, Chloe Newcomb. Newcomb works as a victim advocate, the same position that Thornton herself held. Thornton's latest work Empty Houses was issued by Severn House in the UK on March 31, 2015, and in the United States in July.