‘Murder on Sea’ by Jane Adams 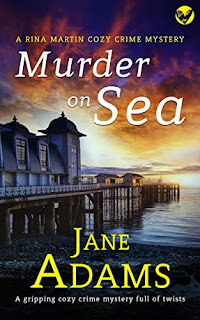 After six months off due to stress caused by his last case, Detective Sebastian McGregor has just arrived at quiet Frantham-on-Sea in Dorset. He is soon sent out to investigate a spate of burglaries in the area and his enquiries lead him to Rina Martin whose frail old neighbour was a recent victim. Rina is a retired actress who runs a very successful guest house. Mac, as Sebastian is known, recognises her as the person who played the part of a popular sleuth in a television series.

When the peace and quiet of the small seaside town is shattered by the brutal murder of a fragile old lady living near her, Rina takes on the mantle of her screen persona and is determined to help solve the case.

Meanwhile, we learn of two young lads acting strangely. Mac suspects them of being involved in the recent burglaries but feels someone more vicious may be putting them up to it. They couldn’t have anything to do with the murder surely.

One of the young lads, George, and his family are fairly new to the area having moved there four years ago to escape the really abusive behaviour of his father.

One day George is sure he sees him watching his school, but how did his father find out where they lived? When Rina hears of this, it’s another puzzle she is determined to solve, especially when George later goes missing.

Then there is another murder, and what are the bright lights Mac notices at sea and near the shore?

Mac now really has his work cut out, can the two murders be linked, suspicions lead him to believe there could be two different murderers. He is amazed at so much crime in such a “quiet town” and is glad of Rina’s help and knowledge of the local area.

To add to his problems a man then “falls” off a cliff. Not a third murder surely?

I really do enjoy Jane Adams’ books and look forward to hearing more about Mac together with Rina’s exploits. She certainly comes over as a really determined character. I am familiar with the area around Marlborough Head where the action takes place and the pages brought it to life. Highly recommended for readers of stories with unexpected twists. The ending especially surprises!
------
Reviewer: Tricia Chappell