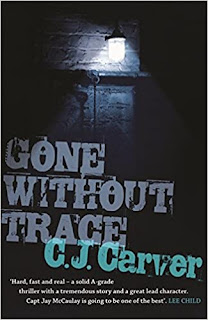 Published by Orion,
5 July 2007.
ISBN 978-0-75287-183-7Jay McCaulay a former Captain in the Paras is now working with the aid agency TRACE, helping to track down and reunite families that have been split up by conflicts.  It is while she is following up a line of enquiry that she spots a face from the past. A very unwelcome face – a crime boss from Macedonia.   Acting on instinct she follows him and walks into a situation she really doesn’t want.

But MI6 want her with her linguistic abilities to help them gain information. Although very reluctant to do so, Jay is at something of a crossroads on the personal front as Police Detective Inspector Tom Sutton is seeking a personal commitment from her, and despite her strong feelings for him she is not sure that she is ready to commit to the style of relationship he wants, and so maybe a break away is just what she needs. Whilst she is pondering her options she hears that a young girl called Zamira who she had saved and reunited with her mother some years previously has vanished from her home in Macedonia, and may possibly have been taken to work as a prostitute, and so Jay knows that she has to find her.

In her pursuit of Zamira Jay is treading on very dangerous ground, and soon she is in deep trouble from all sides.  MI6, the Eastern Europe Mafia bosses, and seeming to pop up everywhere the enigmatic Max Blake whom she first met with Patrick Kingsman and Laura Sharpe, reputedly of The Foreign Office. Interestingly, although he seems to be on both sides, neither side trust him, maybe with good reason.

Told from multiple points of view, that of Jay, the young girl Zamira, and the wolf in sheep’s clothing Branko Morillon,the story moves along at a terrific pace; as does the sexual chemistry which adds extra spice, creating for Jay an unsettling situation but is intriguing for the reader, adding an extra dimension to a fast paced thriller.

This is Caroline Carver’s best book to date, and as the first four were terrific, it makes this a ‘must read’.
----------
Reviewer: Lizzie Hayes
Earlier titles are Blood Junction, Dead Heat, Black Tide and Beneath the Snow.