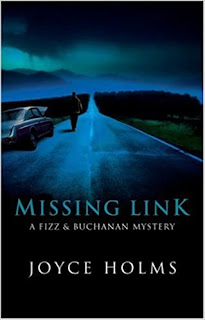 Fizz Fitzgerald is now a fully-fledged lawyer ensconced at Buchanan & Stewart in Edinburgh. The days when she leapt on each piece of legal work with a glad cry are behind her, so when silver-haired Mrs Sullivan is shown into Fizz’s office she takes her feet off the desk and prepares to be bored. But gentle motherly looking Mrs Sullivan wants Fizz to prove that she has murdered Amanda Montrose, a woman whose body was found in Inverness back in March.  Mrs Sullivan is happy to pay whatever it costs, and Fizz knows just the man for the job.

Buchanan having left the practice the previous year to branch out into advocacy is...I think ‘struggling’ is the right word, on this, the next rung of the legal ladder - well the bottom rung actually.  But despite being not as well-heeled as in current years Buchanan still has his standards and, as he tells Fizz, ‘Fleecing an batty old woman of her money for the hair-brained scheme she has just outlined falls well short of those standards.’  But Fizz points out that a man has already been sentenced to fourteen years imprisonment for the crime and if there is the slightest chance of a miscarriage of justice, well …. Fizz has her man.

But proving that Mrs Sullivan murdered Amanda Montrose is easier said than done. As they delve into the affair they find that they have another suspect for the murder, and then soon they have more than one suspect, and more seem to be appearing. The story is well-plotted and as fans of this excellent series will know there is always a delicious twist that turns you on your head, and this one lives up to expectation. Characterisation is as always marvellous - I so enjoyed Justin, a quality craftsman with a City and Guilds certificate who cooks like an angel, and of course the wonderful interplay between Fizz and Buchanan.  Not to be missed.
------
Reviewer: Lizzie Hayes
Earlier books in the series are Payment Deferred, Foreign Body, Bad Vibes, Thin Ice, Mr Big, Bitter End Hot Potato and Hidden Depths.