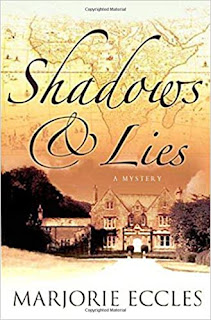 Inspector Crockett of Scotland Yard is sent to investigate the murder of a young woman, whose body was found on the Shropshire estate of Belmonde, owned by Sir Henry Chetwynd.

The woman’s clothing implies she is a suffragette but Louisa Fox, friend of the Chetwynd family, training to be a doctor and a part-time advocate of women’s rights, does not recognise her.

Sir Henry’s second son and now heir to the family fortunes, Sebastian, suspects that the woman might have some connection with his dead elder brother - a mistress perhaps? He and Louisa intend to find the identity of the dead woman.

The dual investigations are interspersed with passages narrated by Hannah, a woman living in London who has lost her memory of the last nine years. Her psychiatrist advises her that if she tries to write her early memories down, she may recall the later ones in more detail. And it works. Hannah tells of her childhood and how she spent time in Africa during the siege of Mafeking and finally recalls some very important personal circumstances.

Through following leads, Crockett is finally able to link the two narrative threads together and the mystery is concluded in a final confrontation with all the suspects in the drawing room at Belmonde.

Shadows and lies is an interesting read, with all the background on the Boer War and the siege of Mafeking. However, the pace down did slow down in the middle before reaching the parts that were relevant to the murder investigation. Ultimately though the two stories being told in parallel do dovetail neatly at the end. The Edwardian era was well evoked and I’d recommend this to anyone missing Gillian Linscott’s Nell Bray series.
--------
Reviewer: Karen Meek

Marjorie Eccles was born in Yorkshire and spent much of her childhood there and on the Northumbrian coast. The author of thirty-three books and short stories, she is the recipient of the Agatha Christie Short Story Styles Award. Her earlier books featuring police detective Gil Mayo were adapted for the BBC. Her most recent series is set after the Great War and features DI Herbert Reardon. There are five books in the series. Marjorie has also written 14 standalone novels. She lives in Hertfordshire.