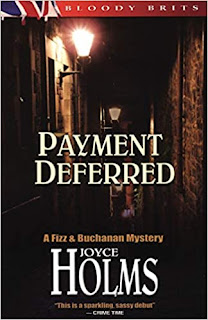 Tam Buchanan is a conservative solicitor who has undertaken a legal surgery at the local community centre. His request for typing assistance secures him the services of one Fizz, soon to be a mature law student. The flaw in the arrangement is that Fizz cannot type, but she is desperate to keep the job. To this end she strikes a bargain with Donna one of the main receptionists in the centre in return for Fizz furthering her cause with Tim, with whom she is romantically enamoured.

Murray Kingston, recently released from prison for molesting his daughter, wants Tam to help him obtain sufficient evidence to convince the Procurator Fiscal to reopen the case. Fizz who has a talent for making people talk to her, persuades a reluctant Tim to take on the case offering to do all the leg work. Against his better judgement Tam agrees.

Whilst Fizz interviews witnesses and the mystery unfolds, I found the greater part of my enjoyment of the book being the interplay between Fizz determined to hold onto her job, and Tim equally determined to fire her. Her tenuous position is not improved when Donna begins to get restive about the lack of progress on her case.  As she says to Fizz "He doesn't seem to be any more aware of me as a woman. even when he gives me a wave you can tell he doesn't really see me. I've seen people waving at taxi’s with more affection” as Fizz says "When you have nothing to bargain with, all you can do is bluff and play for time. In time, after all anything could happen: Donna could drop dead, Buchanan could drop dead, Donna could meet someone else, Buchanan could go bald, Donna could turn frigid, or Buchanan could lose his mind and fall for her off his own bat."

I absolutely loved this book. It is the first in what is now a highly acclaimed series.  I cannot recommend this book to highly. It is a must for all mystery fiction readers.
-----
Reviewer: Lizzie Hayes