‘The Sanctuary’ by Charlotte Duckworth 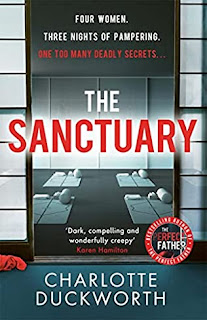 Five women, four of them at various stages of pregnancy, the fifth running a luxury yoga retreat in an idyllic rural location. What could possibly go wrong?

Everything, of course. It’s clear from the outset that Selina, the hostess, yoga instructor and self-styled therapist and proponent of all things natural in pregnancy and childbirth, is not as serene and confident as she appears. And each of the women carries her own load. Domestic goddess Nicky’s third pregnancy was unplanned, and she is aching to get back to work rather than embark on yet more maternity leave. Her scatterbrained younger sister Bonnie is still at college, and the identity of her baby’s father is a mystery. Journalist Georgia is nursing a secret which could threaten her apparently perfect but still very new relationship. And Poppy, still recovering from the tragic death of her first baby, is very angry.

Cracks start to show very early in Selina’s perfect weekend. The tension between her and her partner Will is palpable. The weather refuses to co-operate. Then strange things begin to happen: the sound of a baby crying in the night; a dead rat on the doorstep; one of the luxury tents collapses for no obvious reason. Somehow you know almost from the start that it will all end in tears.

The five women who occupy centre-stage are all the kind of characters you almost expect to step off the page and say hello, and the men in the background are no less real. Will, Selina’s partner, is taciturn to the point of dourness. Her teenage son Kai, hidden away in a converted pigsty, is volatile and emotional. Badger, the volunteer gardener-cum-farmhand, is knowledgeable and affable, but quiet and a bit of a mystery. The husbands and partners left behind at home are no less well drawn, though less present in the narrative.

As secrets come tumbling out and the past begins to leak into the present and threaten to bring Selina’s dream crashing down, you’ll ache for the four women, who only wanted to escape their caring roles and be cared for themselves for a few days. And you’ll want to dig deeper into those secrets, and find out exactly what’s been going on. Once again Charlotte Duckworth has picked up the domestic noir sub-genre and run away with it. ------
Reviewer: Lynne Patrick

Lynne Patrick has been a writer ever since she could pick up a pen, and has enjoyed success with short stories, reviews and feature journalism, but never, alas, with a novel. She crossed to the dark side to become a publisher for a few years and is proud to have launched several careers which are now burgeoning. She lives in Oxfordshire in a house groaning with books, about half of them crime fiction.
Posted by Lizzie at 13:50