‘The Midnight Hour’ by Elly Griffiths 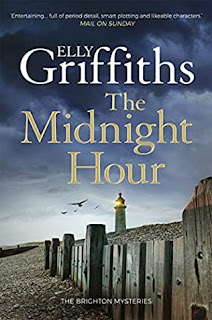 Set in Brighton 1965, the story opens when Bert Billington theatrical impresario, aged 90, is found dead in his chair by his youngest son Aaron. In the house at the time was his wife the ex-Music Hall star Verity Malone. Initially thought to be a heart attack a post-mortem showed quantities of rat poison in his blood.

Assigned to the case DI Bob Willis and WDC Meg Connolly visit Verity. Asked by DI Willis if she could think of anyone who had a grudge against him, her reply is ‘only everyone who ever knew him’.

An allegation that Verity, fifteen years younger than her husband, who now needed constant care, and resented her husband throws suspicion on her. To prove her innocence Verity hires Private Detectives Homes and Collins. It is the first real case for their Detective Agency. Sam Collins is a journalist while ex-DS Emma Holmes is married to Superintendent Edgar Stephens.

Verity’s second son Seth is filming a remake of Dracula, and playing his father is the ex-magician, Max Mephisto. Knowing that Max was friends with Edgar Stephens as both served together in the war as part of a group called the Magic Men, Seth asks Max if he can find out how the investigation into his father’s death is going.

Investigation quickly reveals that Bert was not the faithful type. His company Billington Productions is run by Bert’s eldest son David, and over the years he has paid off several women who turned up saying they had Bert’s child. Pamela Curtis, worked for Bert for years,1945-1960. She managed his properties, booked all the tours, and looked after the actors, and says, ‘she stopped people killing him’. The list of people who might have a grudge against Bert was growing longer by the hour.

This is the sixth book in this series. I have always liked Max, but it is clear early in in the book that Max is feeling discontented. He is now 55 and although he is now getting acting parts, he feels it’s not really him. Walking past the Theatre Royal in Brighton, he recalls nostalgically the many happy nights sawing women in half. Max’s daughter Ruby, by a former liaison with a snake charmer, has her own TV show – Ruby Magic. So, what’s next for Max?

DI Bob Willis and Meg Connolly continue their investigations, as do Emma and Sam. Who will find the killer first? Emma is a good detective but once married to Edgar she had to resign, and it still rankles. She loves her children, but her great love is still detection.  In that period, it was a rule ‘No Married female police’. So, Emma is pulling out all the stops

There are a lot of characters, and I can’t say that I took to them all. I did however like Meg Connolly a lot.

A baffling mystery, with lots of red herrings, and I did not guess who the killer was -will you?
------
Reviewer: Lizzie Sirett 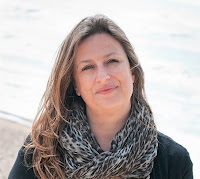 Elly Griffiths is the author of a series of crime novels set in England’s Norfolk county and featuring forensic archaeologist Ruth Galloway. The first in the series, Crossing Places, earned a good deal of praise both in Griffiths’ native country, England, and in the U.S. The Literary Review termed it “a cleverly plotted and extremely interesting first novel, highly recommended.  Since then, Elly has written thirteen further novels featuring forensic archaeologist Ruth Galloway.  The most recent is The Night Hawks. Recently she has written a second series set in the 1950’s featuring magician Max Mephisto and DI Stephens. There are six books in the new series. The Midnight Hour is the latest.