‘Back With A Vengeance’ by C J Carver 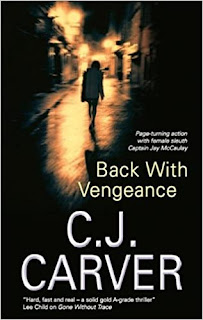 The opening of this book is heart-in-your-mouth stuff.  Captain Jay McCauley awakes in a hotel room feeling dreadful. Staggering to the window, she opens the curtains and realises she is in Moscow – but she cannot remember how she got there. When she contacts the hotel desk, she discovers that she has lost five days of her life.

Her memory is patchy, but she pieces together that she has been kidnapped and drugged, and the last true memory she has is looking for her Aunt Elizabeth’s husband Duncan, who had just disappeared. I said that the opening of this book is heart-in-your-mouth stuff – well, the tension never lets up.  When Jay returns to the UK, she starts again looking for Duncan and discovers things about the supposed happy family man that lie uneasily with her. Soon she is embroiled in lies, deceit, with a powerful Russian oligarch.  Her investigations lead her to Siberia and back to injustices perpetrated many years ago.

On a personal front, DI Tom Sutton is still around, but their relationship has moved out rather than in, and Jay is still unsure if she wants it to move back to where they were. Meanwhile the enigmatic Max Blake reappears.

This is high adventure, a real thriller. I sat up until 3.30am to finish it – no way could I go to sleep before I knew the outcome.  Very highly recommended.~
------
Reviewer: Lizzie Hayes

C J Carver was brought up on a dairy farm. At 18 she headed for the bright lights of London and four years later took a holiday in Australia which turned into a ten-year stay, working for the Sydney arm of several major international publishers. Between jobs, she travelled widely and adventurously: back-packing in South-East Asia on $10 a day for nine months, walking in New Zealand, trekking in Nepal and riding a camel through the Thar Desert are just a few of her travel experiences.

Her first novel Blood Junction won the CWA Debut Dagger and was selected by Publishers Weekly as one of the best mystery books of the year.