‘Stalked By Shadows’ by Chris Collett 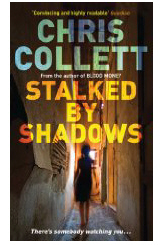 Newly married Lucy Jarrett is certain she is being watched. And she keeps getting silent telephone calls.  With her husband away much of the time Lucy contacts the police, even though she is sure that they will not take her seriously as she has nothing much in the way of real evidence – the telephone calls only come when her husband is away.  But the recent murder of another young woman prompts DI Tom Mariner to instigate an investigation.

But DI Tom has more weighty matters on his mind as Nina Silvero, the widower of a former police officer, has been found murdered, and the team are stretched checking back through former cases to see if the killing is linked to her husband’s past misdemeanours, and is in fact a revenge killing.

The two investigations make for a fast-paced read. There are many clues that seem to go nowhere but must somehow be part of the whole. The intricate relationships of the investigating team and those under investigation give a very rounded look at the individual characters.   For me a particularly interesting aspect is that the book is based in Birmingham, where I spent my early years.  In all, a very enjoyable, compelling book. Very highly recommended.
-----
Reviewer: Lizzie Hayes
Earlier books in the series are: The Worm in the Bud, Blood of the Innocents, Written in Blood, Blood Money

Chris Collett  grew up in Gorleston-on-Sea, Norfolk, before training, in Liverpool, as a teacher for children with learning difficulties. After graduating she moved to Birmingham to work in schools and local authority services for children with special needs and disabilities and their families. In 1983 she married and moved to Bournville, where she still lives with her husband and two children and has worked variously with children, young people and adults with learning and mental health issues. Chris is now a university lecturer, teaching undergraduate students on subjects including special education needs, disabilities and inclusion, and equality and human rights. When she isn't working, Chris enjoys walking, badminton, photography, reading, cinema, theatre and comedy.  When asked how she became an author, Chris has said: 'By confounding my own and other people's expectations. I still can't manage to shake the idea that 'people like me' don't become writers. I think of myself as a teacher who happens to write.'