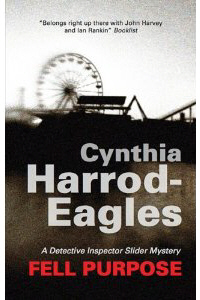 
Inspector Bill Slider is now a father, and the elegant Sergeant Atherton now has a steady girlfriend. It’s a Bank Holiday and Bill has arranged to take Katie and Matthew, the children of his first marriage, and Joanna and the new baby, to visit his elderly father in Essex, whilst Atherton has arranged a day out with Emily. But both outings are off when the body of a young girl is found in the Wormwood Scrubs area.

The girl is identified as Zellah Wilding, a straight A student from a good family. But there are anomalies – why would she be seeing Ronnie Oates, a boy from the wrong side of the tracks, and where is her mobile? When they get a confession, Superintendent Porson looks as if he’s been thrown a lifeline, but Slider isn’t sure. But as Porson says, ‘Rhodes wasn’t built in a day’

Whilst the main protagonist is Bill Slider, who I like enormously, as I do Atherton, any devotee of this series like me must love the Porsonisms which abound in this book. Not sure if it’s a good or bad thing that I love it when Superintendent Porson is supplying his own band of proverbial expertise – just throw some words out, some will make it through! Highly recommended.
----
Reviewer: Lizzie Hayes
Earlier books in the series are, Orchestrated Death, Death Watch, Necrochip, Dead End, Blood Lines, Killing Time, Shallow Grave, Blood Sinister, Gone Tomorrow, Game Over

Cynthia Harrod-Eagles was born in Shepherd's Bush in London. She was educated at Burlington School, a girls' charity school founded in 1699, and at the University of Edinburgh and University College London, where she studied English, history and philosophy. She wrote her first novel while at university and in 1972 won the Young Writers' Award with The Waiting Game. Afterwards she had a variety of jobs in the commercial world, while writing during the evenings and weekends. The birth of the Morland Dynasty series enabled her to become a full-time writer in 1979. The series was originally intended to comprise twelve volumes, but it has proved so popular that it has now been extended to thirty-five. In1993, she won the RNA Novel of the Year Award with Emily, the third volume of her Kirov Saga, a trilogy set in nineteenth century Russia, and she also writes the internationally acclaimed Bill Slider Mysteries. There are now twenty three books in the series. Cynthia Harrod-Eagles still lives in London. Apart from writing her passions are music (she plays in several amateur orchestras) horses, wine, architecture and the English countryside.