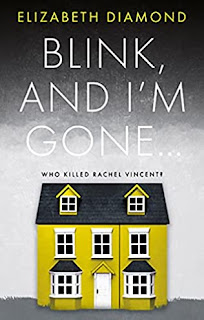 “I have no eyes, but yet I see things.  I see things that are real,
and are not real yet.”

Ben Vincent comes home from work one day to find his three-year-old child keeping vigil next to the violated body of his wife, Rachel.  It is not clear exactly what, if anything, his daughter Molly saw of the dreadful assault.  It seems that the events of the day have retreated to a place somewhere deep within her subconscious.

Detective Inspector Gardiner leads the hunt for Rachel’s murderer, but initial enquiries prove fruitless, and without evidence from the only potential witness hope of a breakthrough soon vanishes.  The impact of Molly’s trauma is revealed through persistent nightmares, yet even a renowned child psychologist is unable to dislodge her blocked memories.  After a time, the case goes cold.   Ben and Molly relocate from London to Wales and Gardiner moves on to deal with new atrocities.  The detective, however, never quite forgets the poignant case that she has been unable to solve.

The move to Wales places Ben and his daughter nearer to his in-laws, Ted and Sylvia Brooks, who have been supporting the pair since the awful day of Rachel’s death.  The adults want to move on from the devastating event and build a new life for themselves and Molly.  But they are not the only ones who seek release from the past.  Rachel’s spirit is trapped between this world and the next and until she can recall exactly how and by whom she was killed, she cannot escape her eery prison.  She longs to move on and is slowly beginning to piece together the years, months, weeks and days before she died, but she can only do so much from her limbo.  To crack the case and escape to the next life she must try to prompt memories and intuitions within those who have survived her.

Blink And I’m Gone tells the story of a crime that is solved by its victim.  Rachel narrates the tale which unfolds through wistful and often moving prose.  There is a gentleness about the book that belies the graphic and disturbing incidences that have led to the supernatural sleuth’s demise.  At times the trauma experienced by the central characters is almost painful to read and yet so compelling that one cannot put the book down.  The plot is firmly situated within the genre of crime fiction and weaves effortlessly between Rachel’s ethereal world and the gritty reality of mortal existence and demise.

Elizabeth Diamond has been widely published in poetry journals and has a collection entitled Windfalls Weighing Down the Heart, which was written as part of her submission for an MA in Creative Writing from Glamorgan University, Wales, during which her private tutor was the renowned Welsh poet, Gillian Clarke. After the MA, Elizabeth switched her focus to writing prose and has had two novels published by Picador, An Accidental Light, and Underwater. An Accidental Light was also sold in the US and Germany and was translated into German as Aus dem Nichts. Elizabeth would describe herself, amongst other things, as being a survivor. She has overcome a difficult childhood, poverty as a young single mother of two sons, and has battled with a stammer and depression. Now in her sixties, she is happy and comfortable in her own skin and uses her life experience in writing about characters 'on the edge' of their lives. She lives in Devon, only a short walk from the sea. She enjoys painting seascapes and animals in acrylics and has sold a number of her 'fish paintings' in her local town.