‘The Night Hawks’ by Elly Griffiths 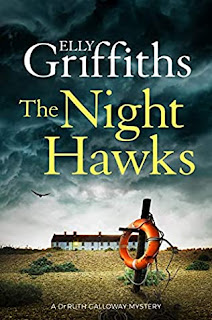 Searching for buried treasure in North Norfolk a group of metal Detectorists known as The Night Hawks discover a body.  Called to the site, at first DCI Nelson thinks that the dead man may be an illegal immigrant as there have been reports of migrant boats coming this way.  However, the metal detectorists are excited by a find close by, and Nelson calls Ruth Galloway.

Ruth has now left her job at a Cambridge college and returned to the Fens and the University of North Norfolk, and the door of the coveted corner office on the archaeology corridor now bears the plaque Dr Ruth Galloway. Head of Archaeology.  No longer will Ruth be subjected to Phil Trent’s control, as Phil has taken early retirement, and now Ruth has the top job. But all is not perfect, as her replacement David Brown is beginning to irritate her. When she takes the telephone call from Nelson, she finds that somehow David Brown is accompanying her in her car – uninvited.  No, everything is not perfect.

After a day dodging his Superintendent, who keeps raising the subject of his retirement, Nelson is called out to Black Dog Farm where shots have been heard. It’s not unusual to hear shots in rural areas but in a house is a different matter. As he drives there he muses on how long he can avoid the retirement question. He’s done 33 years of service, but is determined not to go without a fight, although he is aware that while he remains in situ he is blocking the promotion of DI Judy Johnson. Entering the house they find the bodies of a man and a woman. Possibly a murder -suicide says Judy.

When Ruth receives permission to evacuate the site uncovered by the metal detectorists, Judy says Cathbad will be interested in joining them. Cathbad - Kate’s druid Godfather is now married to Judy.  Interestingly Cathbad, who in the early books I was rather suspect about, is now a marvellous character in this series. Indeed, he has proved to be a good friend to Ruth, and indeed to Nelson.

Black Dog Farm proves to be a creepy place, which according to local legend is a place where a Black Shuck, a spectral hound appears to people before they die. Nelson is sceptical of legends local or otherwise. But the news the next morning that a young PC has unexpectedly dies takes them all by surprise.

Apart from providing a fascinating mystery, the writer incorporates that wonderful, Jane Austen subtle tongue-in-cheek humour, in several places. My favourite in this book was Ruth driving home with daughter Kate and feeling safe and happy as she listens to Radio 4 and Farming Today, despite the fact that she knows nothing about agriculture beyond what she gleans from The Archers (mostly silage, modern slavery and surrogate parenting).  But is there danger waiting for Ruth at Black Dog Farm?

There are several strands to this story which the writer skilfully draws together providing yet another compelling and intriguing mystery. Highly recommended.
------
Reviewer: Lizzie Sirett 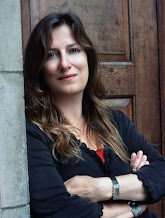 Elly Griffiths is the author of a series of crime novels set in England’s Norfolk county and featuring forensic archaeologist Ruth Galloway. The first in the series, Crossing Places, earned a good deal of praise both in Griffiths’ native country, England, and in the U.S. The Literary Review termed it “a cleverly plotted and extremely interesting first novel, highly recommended.  Since then, Elly has written twelve further novels featuring forensic archaeologist Ruth Galloway.  Recently she has written a second series set in the 1950’s featuring magician Max Mephisto and DI Stevens. There are five books in the new series. Click on the title to read a review of Elly’s latest Max Mephisto Book. Now You See Them.