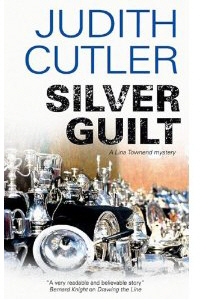 Lina Townsend is a dealer in antiques; although young and learning all the time, she has a nose for an item of value.  Whilst she has a comfortable father-and-daughter relationship with her professional partner, Griff, her real father is in fact Lord Eltham of Bossington Hall. The Hall is now owned by a trust, but Lord Eltham lives in a wing of the historic mansion surrounded by antiques, some of which he instructs Lina to sell from time to time to keep him in champagne.

Obeying a summons from Lord Eltham to’ sell something’ Lina finds a silver dish that her nose tells her could be valuable.  To get the best price Griff suggests that she attend an antique fair and in return for minding the stall put the item on show on the stall of Lady Petronella Cordingly – not a lady with which I would like to share anything, but as she is the sister of Aiden, Griff’s lover, Lina reluctantly agrees.  The silver dish attracts a fair amount of attention – not only from prospective buyers, but from the police as well.

Lina is an engaging heroine, and there’s some fine characterisation in the supporting cast.  For young Lina there is plenty of love interest – Detective Sergeant Morris, the local vicar Robin Levitt, and attractive Piers Hamlyn.

A perplexing mystery, with some good twists, and a satisfactory outcome. Recommended.
-----
Reviewer: Lizzie Hayes

Judith Cutler was born in the Black Country, later moving to the Birmingham suburb of Harborne. Judith started writing while she was at the then Oldbury Grammar School, winning the Critical Quarterly Short Story prize with the second story she wrote. She subsequently read English at university. It was an attack of chickenpox caught from her son that kick-started her writing career. One way of dealing with the itch was to hold a pencil in one hand, a block of paper in the other - and so she wrote her first novel. This eventually appeared in a much-revised version as Coming Alive, published by Severn House. Judith has seven series. The first two featured amateur sleuth Sophie Rivers (10 books) and Detective Sergeant Kate Power (6 Books). Then came Josie Wells, a middle-aged woman with a quick tongue, and a love of good food, there are two books, The Food Detective and The Chinese Takeout. The Lina Townsend books are set in the world of antiques and there are seven books in this series. There are three books featuring Tobias Campion set in the Regency period, and her series featuring Chief Superintendent Fran Harman (6 books). Her more recently a series feature a head teacher Jane Cowan (3 books). Judith has also written three standalone’s Staging Death, Scar Tissue, and Death In Elysium. Her new series is set in Victorian times featuring Matthew Rowsley. Death’s Long Shadow is the third book in this series.