‘The Burning’ by Sue Walker 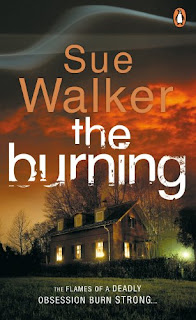 Murray Shaw is married to Rowan and living in London. But when Murray sees his dream home, the imposing St Margaret’s House in an exclusive Edinburgh district he buys it, and moves a reluctant Rowan and her son from London to Edinburgh.

But St Margaret’s house is not just Murray’s dream home – it is a house he knows well. Forty years earlier Murray’s schoolfriend Angus lived in that house until his death when he was ten years old which still remains a mystery.

Whilst Murray is surprised to find that the minister of St Margaret’s Church, the Reverend Shelagh Kerr is living next door, Shelagh is considerably unnerved.  Although it’s forty years since Murray has lived in the area, others have stayed and others have left and returned.  Fiona Muir is now headmistress of the local school, and so the past tragedy is far from forgotten. And Fiona has theories of her own that she is keen to share with Murray.

But for Rowan this is just a house and although she is still not totally convinced that moving so far from London is a good idea, she is prepared to give it a go. Until the unexplained acts of vandalism. Then she discovers that Murray has deceived her, and slowly Murray’s life starts to unravel as he can no longer keep the secrets from coming out.

A well plotted mystery that keep this reader turning the pages. Highly recommended
------
Reviewer: Lizzie Hayes
Other books are: The Reunion, The Reckoning, The Dead Pool

Sue Walker is an investigative television journalist. She has spent many years specializing in crime-related documentaries. Born in Edinburgh, she now lives on the Sussex coast but her novels are based in Scotland. They are set in dramatic locations such as the Outer Hebrides, the East Lothian coast, and lesser-known parts of Edinburgh. She began her career with the BBC before going freelance. Since then, she has worked for all the UK networks. This included a Channel 4 series on miscarriages of justice that helped free prisoners wrongly convicted of murder.