‘Dead in the Water’ by Aline Templeton 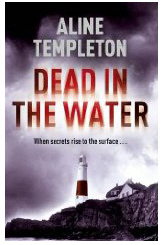 Aisla Grant’s body was washed up on the rocks at the Mull of Galloway, in October 1985 – she was just twenty-four years old and pregnant, and no one was ever charged with her death.

Now twenty years on DI Marjorie Fleming is asked by Donald Bailey, her superintendent, to re-open the case.  For Marjory this is not a welcome cold case as it was originally investigated by Sergeant Angus Laird, Marjorie’s late father, and Donald Bailey.  After looking through the dusty files, Marjorie and her team begin to re-interview the family and suspects.  As the investigation proceeds, Marjorie becomes more and more uncomfortable as to her mind the previous investigation was not handled to a professional degree.  The two prime suspects were Aisla’s brutish father Robert Grant, and the actor Marcus Lazansky who, it was rumoured, could be the father of Aisla’s child. At the time of Aisla’s death Marcus was reported to be in America, but that doesn’t stop Aisla’s mother blaming him.

This time, Marcus Lazansky is in residence in the family home, shooting a soap opera, and with him making an appearance after a long absence from the screen is actor Sylvia Lascelles, his ex-father’s mistress, now old and frail but still able to turn on the charm.  Also staying in the crumbling cold mansion is actor Jaki Johnston, Marcus’s current girlfriend.

The story is more than a mystery it explores the lives of several families: not only Marjorie’s parents’ but her relationship with her husband and children and the delicate balance she maintains to be a wife, mother and keep on top of a demanding job; Marcus Lazansky, whose life is still under the influence of his Polish father Laddie Lazansky even though he has been dead for some years; and the family of Aisla Grant.

All the characters are well drawn, and the tension is maintained throughout.  As the story progresses, more skeletons come out of the woodwork, and a murder takes place that relates back to the death of Aisla Grant. In the midst of the investigations Marjorie is personally put to the test. With many surprises along the way, this is an excellent mystery, and highly recommended by this reader.
-----
Reviewer: Lizzie Hayes
Earlier books in the series Cold in the Earth, The Darkness and the Deep, Lying Dead, Lamb to the Slaughtter

Aline Templeton grew up in the fishing village of Anstruther, on the east coast of Scotland not far from St Andrews.  The memories of beautiful scenery and a close community inspired her to set the Marjory Fleming series in a place very like that – rural Galloway, in the south-west of Scotland. After attending Cambridge University to read English she taught for a few years.  She now writes full-time.  Her most recent series features DCI Kelso Strang, officer in charge of Police Scotland’s Serious Rural Crime Squad. Old Sins is the fourth book in the series.