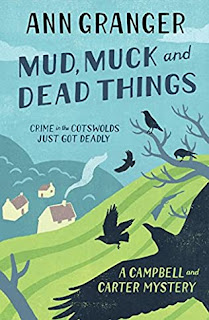 Life in a Cotswold village . . . the essence of rural tranquillity … but not always. There is a darker side. Twenty-five years ago, the Smith family – Albert, Millie, their sons Nathan and Eli – lived and worked at Cricket Farm. Then Nathan, for no apparent reason, killed his parents and then himself. Only Eli was left; although he still farms the land, he no longer lives in the farmhouse and uses the farmyard as a scrap metal dump. The farmhouse and outbuildings are locked up and derelict. A perfect place for dodgy property dealer Lucas Burton to rendezvous with one of his associates. Except that when Lucas arrives in his silver Mercedes, the only person in the barn is a young woman and she is very dead. Lucas is out of the barn like a bat out of hell, but his car is seen by others, particularly Penny Gower who runs the nearby stables. Penny’s friend Andrew Ferris calls the police.

Enter Detective Inspector Jess Campbell (who appeared briefly in the last Markby and Mitchell, That Way Murder Lies) in the first of a series featuring her and the enigmatic Superintendent Carter. Enter also an array of well-drawn and lively characters: Jess’s grumbling sergeant Phil Morton, the cheerful forensic pathologist Tom Palmer, the feisty Czech waitress Milada, the neurotic Dave Jones, the deeply unpleasant Mark Harper, to name but a few. Add them and others to a strong, well-worked out and original plot and you have, as ever with Ann Granger, a really satisfying read.
-------
Reviewer: Radmila May