‘The Runaway’ by Nick Petrie 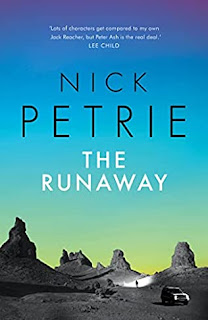 This is the seventh book in the series featuring ex-marine Peter Ash, who having served in Iraq and Afghanistan has been left with a legacy he calls his “white static,” the buzzing claustrophobia due to post-traumatic stress that drove him to spend a year roaming the country and sleeping under the stars. Although his PTSD is now gradually lessening, it’s never far away.

Driving through Northern Nebraska he rescues a pregnant woman who he finds standing alone beside her dead car and he offers her a lift.  His good deed leads him into a deadly chase as her husband, an ex-cop, pursues her.

The story unfolds told in alternating chapters told by Helene, the young woman, and Peter, and headed ‘Then’ and ‘Now’.  And so, we learn how Helen came to be in the predicament she is in.  Although, having known Peter only a few hours, she is unsure that she can totally trust him and so she keeping a lot to herself.

With her husband’s police background and therefore contacts, neither Helen nor Peter can risk contacting the police, and so Helene and Peter are on their own.  It is a breath-taking chase as they surmount one obstacle after another with the pursuers – yes, it’s not just her husband now chasing them, although Peter doesn’t actually know who they are, only that they are clearly determined to kill him.

This is a book that keeps you in the edge of your seat.  A heart in your mouth page turner. Most highly recommended.
------
Reviewer: Lizzie Sirett

Nick Petrie received his MFA in fiction from the University of Washington, and won a Hopwood Award for short fiction while an undergraduate at the University of Michigan. His story At the Laundromat won the 2006 Short Story Contest in The Seattle Review, a national literary journal.  A husband and father, he has worked as a carpenter, remodeling contractor, and building inspector.  He lives in Milwaukee.