‘The Serpent Pool’ by Martin Edwards 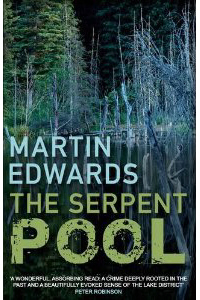 New Year's Eve, and DCI Hannah Scarlett is reluctantly readying herself for a party hosted by rich lawyer Stuart Wagg. But anything is an improvement after spending seven claustrophobic days at Christmas cheek by jowl with Marc's (her partner's) family.  As Stuart is one of Marc's best customers, and having recently moved to a new house that needs a lot of work, they need all the money they can get.  Marc Amos is a second hand bookseller, specializing in rare books, and with his best customer recently being found burnt to death along with all his books, Marc cannot afford to lose another customer.

Back at work, Hannah – head of the Cold Cases Division of the Cumbria Constabulary – is currently looking into the death of Bethany Friend, who six years ago died from drowning in The Serpent Pool. But was it suicide or murder?  As Hannah interviews the people who knew Bethany she begins to suspect that Marc did, too, but if he did he has never mentioned it when the subject has come up. Is Marc hiding something? And could it have anything to do with Bethany's death? The easiest thing would be to ask him, but the relationship between Hannah and Marc is already strained, and so she puts it off, trying to find the right time.

Hannah and Marc have clearly moved apart in their relationship, and although their differences must have always been there they are now becoming more apparent as time passes. The relationship problems are handled well, with skill and sensitivity, and contribute much to the feel of the story. Marc is clearly very attractive and every so often does something that reminds Hannah why she fell in love with him, but there is no doubt that he gets petulant when things don't go his way and that can be wearing.

Meanwhile Daniel Kind, to whom Hannah was attracted, has now returned from his six-month stint in the USA.  Another death gives occasion for them to meet and the attraction resurfaces. But as Hannah begins to make links between the deaths, Marc is pursuing a line of enquiry of his own.

A past unsolved death, recent unexplained deaths and complex relationships make this is a page turner.  Martin Edwards skilfully weaves all the past and present events into a fascinating story with a nail-biting climax.

I have enjoyed all the books in this series, but this is the best to date. Once I started it I couldn't put it down.  Highly recommended.
------
Reviewer: Lizzie Sirett
Earlier books in the series are: The Coffin Trail, The Cipher Garden, The Arsenic Labyrinth