‘Trick or Treat’ by Katerina Diamond 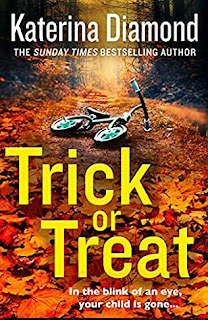 Trick and Treat is the latest in the Adrian Miles and Imogen Grey Series. A lot has changed in Adrian’s and Imogen’s lives since the previous book, Woman in the Water. At the end of that story, one of his adversaries had Adrian raped repeatedly over a five-hour period.  A year has passed since then, but Adrian is still struggling to come to terms with his terrible ordeal. Unable to cope with police work, and too ashamed to tell ex-colleagues - including Imogen - what has happened to him, he has left his job with the police and is now working for a private security firm. Imogen is still a police sergeant. She can’t understand why Adrian keeps pushing her away, but knows that if something doesn’t change soon their loving relationship is in danger of breaking down completely.

One morning the police receive an anonymous tip that a young boy has been snatched from outside his home in a posh residential area in the south of England. The tip had come from a jilted teenager, Jason Hitchen.  He had decided to trash his ex-girlfriend’s home that just happened to be opposite the house the boy was snatched from.

When Imogen and her new partner Sergeant Webb arrive to check Jason’s report, an anxious mother, Sara Carlyle, insists everything is fine. Gentle questioning reveals that six-year-old Marcus is missing and that Sara will do anything to get him back.  Sara’s husband, Peter, insists the ransom of six-hundred-thousand pounds should be paid.  In the meantime, Jason’s rogue of a father, Doug, has reappeared. When Jason tells him what has happened, Doug sees an opportunity to make some easy money.

More than a week passes as Imogen, technical whizz Gary, and Sergeants Webb and Jarvis, and their superior officers try to find Marcus before he is killed. They are hampered by Jason’s father who is determined to get his hands on the ransom money. When Sara Carlyle is badly injured in a knife attack on her way home from dropping off the ransom money, her husband seems more frustrated by their inability to get the money to the kidnappers than he is about his son’s and his wife’s wellbeing.  Eventually, Jason feels obliged to show the police the pictures he took of the kidnapping whilst he was in his girlfriend’s house. The pictures give the police their first big lead.

For the last year Adrian has been searching for the men involved in his own kidnapping.  He gets the name of one of them, Shaun Wakefield, shortly before Jason shows the pictures of Marcus being kidnapped to the police. Adrian visits Shaun whom the police now know helped to snatch Marcus. Shaun is found dead shortly afterwards.  Adrian is arrested for murder and ends up in prison.

Will Imogen and Gary be able to prove Adrian’s innocence?  Can Adrian bring himself to admit what happened to him a year ago and thereby give himself an alibi? Who is behind Marcus’ kidnapping? Who is willing to kill Imogen and Marcus and several other people to obtain the ransom money?

Trick and Treat is a convoluted and almost unbelievable story about how low some people can sink in their search for power and wealth. The horror is balanced by acts of kindness that come - as they sometimes do – from the most unlikely sources.  Trick or Treat is page-turner you simply have to finish.
------
Reviewer Angela Crowther. 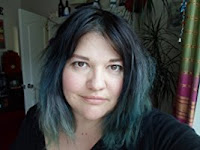 Katerina Diamond is the author of the Sunday Times Best Selling crime thriller The Teacher, and number 1 kindle bestselling novel The Secret. Katerina was born in Weston-super-Mare and has lived in various places since including Greece, Cyprus, Derby, East London and Exeter.  She currently lives in East Kent. 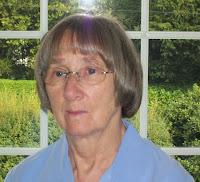