‘The Burning Wire’ by Jeffery Deaver 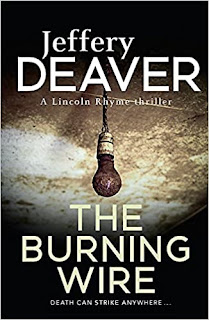 11.20 am New York’s Manhattan's electricity grid begins to record critical failures in several sections and gradually section after section goes down.  A blast from a sub station kills one person and injures several others in an electrical explosion that jumps from the sub-station to a bus stopped nearby, and the city is in panic.

While the FBI try to determine just who is behind this horrific attack, world-class forensic criminologist Lincoln Rhyme, a quadriplegic, assembles his team, NYPD detective Amelia Sachs and officer Ron Pulaski, who discover anomalies in the sub station and seek by forensics to uncover the method used to create the circumstances that caused a blast of electricity in the sub station.

This is the first book I have read featuring Lincoln Rhyme and I am aware that there are nine earlier books in this series.  That this is a dedicated team is evident by the worry shown to Lincoln Rhyme - his blood pressure and his general health, are part of the book. And as the investigation progresses his physical limitations threaten to drive away his closest allies just when he needs them most.

There is an enormous mount of information about electricity which maybe people may find fascinating but initially I admit I didn’t. I read for the mystery, not to learn that my hair dryer puts out 10 amps - about back feed – low voltage - juice to hurt you, current in one wire connecting to another wire…… However, as the story progresses and more and more of these attacks continue across the city we understand that the author is setting the scene to explain just what is happening, and that is, that the perpetrator is reconnecting a few wires in a house or office so that the bathtub, the sink, the computer keyboard, the simple desk lamp, can kill!

Then the demand letters start to appear…..

Whilst urgently seeking the person behind these attacks, Rhyme is consulting on another high-profile investigation in Mexico, a hired killer, Logan, known as the Watchmaker, one of the few criminals to have ever eluded Rhyme.  Handling two massive investigations takes a toll on Rhyme's health.

Clearly this is a must for all Lincoln Rhyme fans, and it’s a forensics dream as Rhyme describes and explains as they gather evidence.
-----
Reviewer: Lizzie Hayes

Jeffery Deaver  was born outside Chicago and has a bachelor of journalism degree from the University of Missouri and a law degree from Fordham University. The author of twenty-nine novels, two collections of short stories and a nonfiction law book, he's received or been shortlisted for a number of awards around the world. He has been awarded the Steel Dagger and Short Story Dagger from the British Crime Writers' Association and the Nero Wolfe Award, and he is a three-time recipient of the Ellery Queen Reader's Award for Best Short Story of the Year and a winner of the British Thumping Good Read Award.