‘His Mother’s Bones’ by Steve Parker 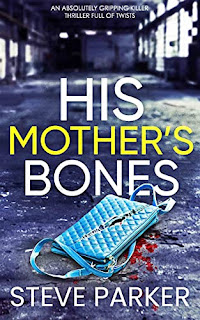 Posh, rich, Superintendent Ray Paterson and down to earth DI John Clocks from Bermondsey are two of the most unlikely detectives one could ever imagine forming a close bond and excelling at solving particularly nasty murders together.  But that is what they do.  Whether you love them or, like some of their superior officers in the Met who hate them and their unorthodox way of working so much that they want to put them behind bars, you have to admit they get results.

Faced with four unique and incredibly grisly murders and a disparate group of victims - it includes the Metropolitan Commissioner of Police, a judge and a captain of industry - that don’t seem to have any obvious link between them, Paterson and Clocks are at a loss. That is until they consult Dr Rakes, an expert on medieval methods of killing who works at the British Museum. Tall, young, attractive and female, Dr Rakes dulls the detectives normally sharp senses as she suggests that a group known as the Bermondsey Knights could be responsible for the atrocities. She posts a message from Paterson to the Knights on the dark web.

These are dangerous times for Paterson and Clocks. They end up being hunted by Met colleagues and, armed only with plastic pistols, they have to fight the Bermondsey Knights who are armed with ferocious, medieval weaponry. The two men go through hell and high water - a sewage pipe/storm drain – as they strive to save one another’s lives whilst proving their innocence and catching the true villains. In the process they also discover the illusive link between the victims.

This is the seventh in the Ray Paterson series. I hadn’t read the previous six, so it took me a while to get used to the repartee between Paterson and Clocks and the idiosyncrasies of Clocks’ speech. However, by the time I got to the end of the book - it finishes with a surprise at the wedding of one of our heroes - I found that I had grown fond of the unusual pair and the strange bond between them. When last heard of, their current plan was to continue solving crimes together under the watchful eye of their friend and supporter, the Met’s Deputy Assistant Commissioner Sam Morne.
------
Reviewer Angela Crowther

Steve Parker was born and raised in South East London (Peckham to be precise ). At twenty-one he joined the Metropolitan Police where he served for twenty years before being pensioned out with a serious back injury. During his time with the police he served in crime, drug, robbery, fraud and murder squads. After leaving the police force, he went to work as an enforcement officer for a local authority before taking redundancy. Having been writing on and off for years he decided to go back to it. He now writes a series featuring Detective Superintendent Ray Paterson and Detective Inspector Johnny Clocks. There are four books in the series to date.  He is married, with two sons and lives in East Sussex.