‘The Common Lawyer’ by Mark Gimenez 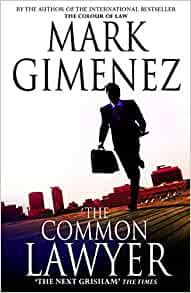 Andy Prescott rides trail bikes, it is his raison d’etre, which explains why although he is a lawyer, he operates from a small office above a run-down tattoo parlour. Andy makes his living by specialising in traffic law – he has the whole operation streamlined to enable him to spend the greater part of his time drinking beer in the sunshine and riding his trail bike.  He is a pretty laid-back lawyer, but Andy does have ambition – to own a IronHorse Slammer – the biggest baddest, ass-kicking motorcycle on the planet.

When billionaire Russell Reeves retains Andy to undertake for him some easy legal work, ostensibly because Andy is known and respected in the community, Andy cannot believe his good fortune. But Russell Reeves has just one sole aim in life – to save the life of his eight-year-old son who is dying of leukemia.  For this he will go to any ends. The instructions he gives Andy seem at first to do only good, but soon Andy becomes uneasy with what he is doing, and when he questions it, everything changes.

The story poses a moral dilemma to what ends will some one go to save the life of someone they love – are there any boundaries? Not it appears for Russell Reeves. And for Andy, becoming rich overnight poses a whole set of problems, was he better off?  Or was the acquisition of a high-speed motor bike too high a price to pay for his old life, for peace of mind, and everything that went with it.

On the whole I enjoyed the book. Although, I am not sure that the method of the ending worked for me. But it was a story that kept me turning the pages.
-----
Reviewer: Lizzie Hayes