‘The Corpse With The Granite Heart’ by Cathy Ace 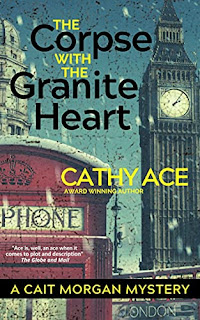 Criminal Psychologist Cait Morgan is looking forward to spending a few days in London with her husband, Bud Anderson. It is just before Christmas and Cait and Bud have travelled from Canada to stay with Bud’s friend, John Silver. They are going to meet John’s fiancée, Bella Quiller and visit some of Cait’s old haunts in London, before travelling to Cait’s native Wales to celebrate their wedding anniversary. John Silver’s earlier relationship with a woman he adored had ended in betrayal and disillusion and Bud and Cait fervently hope that this new relationship works out well and makes him happy. They are eager to meet Bella but are somewhat daunted when they discover that John has arranged for them to accompany him to a formal dinner party with not only Bella but her entire family, in order to celebrate the anniversary of the eightieth birthday of their father, Oleg Asimov, who died a few weeks ago. Cait and Bud hope that they can fight off jet lag for long enough to behave creditably until the end of the dinner, but the evening holds more challenges than they could possibly anticipate.

Before becoming a psychologist, Cait had worked in London for a major advertising and PR agency, until she discovered how shallow and artificial the life was. One of her least likeable colleagues had been a sharply ambitious woman called Alex Asimov. To Cait’s dismay, she re-encounters Alex at the dinner, although she is now known as Sasha Tavistock and is married to Piers Tavistock, another unpleasant hangover from Cait’s PR agency days. Alex/Sasha is Bella’s twin sister, although they have very different aspirations: Sasha is a ruthless businesswoman and Bella an artist who designs gold jewellery. Sasha is the elder twin by ten minutes and, as John tells Bud and Cait, Sasha had been her father’s favourite, living with him and her husband in the beautiful Georgian house belonging to her father, while Bella lives in the coach house next to the main house. As well as Cait’s discomfort at meeting Sasha and Piers again, Cait and Bud are aware that they are the only people at the dinner party who are not intimately connected with the Asimov family. The other people present are Sasha and Bella’s half-brother, their father’s third divorced wife and the wealthy, successful businessman who has been designated to carry on Oleg Asimov’s industrial empire; they are being waited on by a husband-and-wife team of servants who have been with the family for several years. Cait was expecting an awkward evening, but she did not foresee that, before the meal begins, a member of the party would be dead, having fallen from the elegant, Crystal Palace inspired, glasshouse at the top of the house.

Because of the Secret Service expertise shared by John and Bud, and Cait’s reputation as an outstanding Criminal Psychologist, the officer who arrives to take charge of the case allows them to join the investigation into the death. However, before they can establish many facts the investigation is closed down and the death is declared a suicide. What is more, within a few hours, Cait’s reputation is being smeared by distortions of the truth from her past. It is evident that someone with political influence is pulling strings behind the scenes, but no amount of power can curtail the need for investigation when more deaths occur.

Oleg Asimov had been interested in encouraging a knowledge of Shakespeare in young people and each chapter of the The Corpse With The Granite Heart is prefaced by a short Shakespearean quote; and the story of this dysfunctional family, made up of damaged, self-absorbed, destructive people, turns into a tragedy of Shakespearean proportions. This darkness is moderated by the strength and tenderness of Cait and Bud’s relationship and the pleasure they feel when Cait shows Bud some of the intellectual and gastronomic pleasures she had enjoyed when she was living in London.