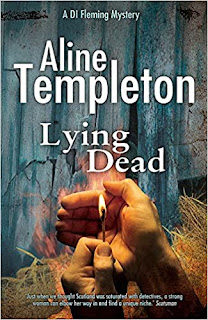 Keith Ingles has served his time, and he is now enjoying his life as forester. On a fine May morning as he stands outside his cabin savouring his good fortune, he hears a mobile phone ringing. Following the sound leads him to the bludgeoned body of the woman whose testimony sent him to prison for robbery. Fearing his innocence won’t be believed, he hides the body.

The prosperous community of Drumbeck conceal a mass of secrets – could any of them be a motive for murder? Niall Murdoch had bought a sheepdog from Finlay Stevenson but the dog doesn’t perform for him, and so he ill-treats it.  His daughter is deeply troubled by her father’s actions towards the dog. Niall’s wife Jenna does little to alleviate the festering atmosphere having her own agenda. But Niall has more to worry about than the just the dog.

DI Marjory Fleming also finds troubles close to home when her husband Bill suggests that they offer a cottage on their land to Finlay and Susie Stevenson who are going through a difficult time, but Susie blames her problems on Marjory and makes for an unpleasant neighbour. Marjory finds herself investigating two murders, and struggling with some personality conflicts in her team. Newcomer to the Galloway force Jonathan Kingsley is arrogant and keen to leap up the promotion ladder, whilst Tasey Kerr has got herself involved with a married colleague. At least Tam is OK.

This is a well plotted mystery that kept me guessing to the end. It has an exciting climax. Recommended
-------
Reviewer: Lizzie Hayes