‘Chronicles Of The Time’ by Penny Freedman 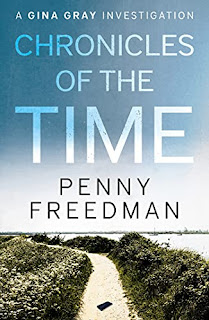 
Lock-down has been announced and Gina and her granddaughter Freda are invited to go and stay with Gina's old friend Eve. The only trouble is Eve suffers from a lung disease and her doctor husband Colin insists she remains in isolation for ten days when they arrive as they have travelled on public transport. They are allowed out, and for exercise Gina, Freda and some friends of Freda's go dog walking daily. Gina notices a creepy looking man watching them from the same place every day – who is he?

Meanwhile Gina's “part time lover” a Detective Superintendent David Scott is investigating the murder of a young girl of seventeen, the media is full of the crime. Having helped him to solve several cases before Gina is eager to offer advice. She has had plenty of experience of teenage girls as she has taught them for years. However, the young girl was killed on the London/Surrey borders in a rather up market suburb and Gina is miles away. Thwarted by the lock-down she is unable to see David in person and keeps pestering him with phone calls, much to his annoyance. Gina though is determined to find out all she can and surprises David.

Also keeping herself from getting bored she takes an interest in her friend Eve's neighbours. The husband Paul is acting very strangely, and she then realises his wife has not been seen recently. Gina, Freda and the girls used to see her out jogging every day, but not for a few days now.  Strangely the creepy looking man who used to watch them has also disappeared – what is going on?

Reluctantly David does eventually turn to Gina for some help, she really is good at solving mysteries as she soon proves. He sends her a video of the tributes paid to the murdered girl by the school and her friends. Something bothers her about one of the people appearing on it. She devises her own way of getting to the truth much to David's amazement at the time.

What a really refreshing and light hearted tale of lock-down conditions, if a plot about a murder can be called “light hearted”! The story is told by three different characters and is often amusing, they seem very real and almost step off the pages, especially Gina. I loved her outlook on life and hope there is soon a follow-up.

I can't recommend this book enough for readers who enjoy a good plot with believable characters.
------
Reviewer: Tricia Chappell

Penny Freedman  grew up in Surrey and studied Classics at St Hilda's College Oxford. Since then she has been, at various times, a teacher, a theatre critic, an actor and director, a counsellor, a mother and a university lecturer. She has written five previous crime novels featuring Gina Gray and her granddaughter, Freda, the heroines of Little Honour