‘The Apollo Murders’ by Chris Hadfield 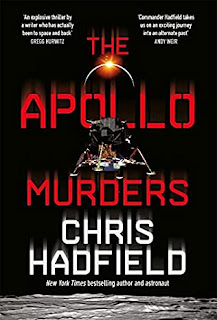 It is 1973, Richard Nixon is President of the United States, Leonid Brezhnev is General Secretary of the Soviet Union’s Communist Party, and the Cold War is at its height. Such worries, however, are far from the mind of Kaz Zemeckis as he touches down in Houston, Texas.

Several years earlier, whilst training to become a test pilot and astronaut, Kaz’s dreams had been shattered by a freak accident in which he lost the sight in one eye. This left him unfit to pursue his chosen career path.  Undeterred, he reframes, retrains and is now about to take up a new role as military liaison officer attached to the latest Apollo moon mission.  When he catches his first glimpse of NASA’s Manned Spacecraft Centre, he has no idea of the dramatic events that are going to unfold as he joins the team who are well into their training.

Within days of Kaz’s arrival, the mission is dealt a dreadful blow when a member of the Apollo 18 crew loses his life during a flying exercise. An investigation is launched, but the two remaining crewmen have little time to mourn before they must welcome their new team member and get on with preparations to meet the launch deadline.  Meanwhile, another change of plan is being mooted. The new CIA Director, Jim Schlesinger, suspects that a recently launched Russian space station is equipped to spy on the United States and its allies. Kaz and his NASA counterparts are ordered to execute a detour from the rocket’s original trajectory so they can get a better look at the Russian asset.  But whilst Schlesinger focuses on the Russian threat, neither he, nor the American team, are aware that another danger exists much closer to home - one that will threaten the NASA mission from within.

Hadfield’s novel features several sub-plots that are held together perfectly by his carefully crafted prose.  There is poetry too, one passage early in the book, for example, provides an exquisite and breath-taking description of the birth of our solar system. Hadfield is perhaps best known for having commanded the International Space Station in 2012 and he deftly includes scientific details that are central to, but never overshadow, the thrilling and fast-moving plot.

The author examines the complicated lives and emotions of his characters against the cold, dark backdrop of an unforgiving cosmos and creates a narrative that is both accessible and relatable.  He exploits the built-in tension of travelling through space where communication is notoriously tenuous, astronauts are entirely dependent on their fellow travellers, and there is nowhere to hide.

This is a tale that will appeal to lovers of science fiction, science fact, murder, espionage, and thrillers. Highly recommended.
------
Reviewer: Dot Marshall-Gent

Chris Hadfield is one of the most seasoned and accomplished astronauts in the world. The top graduate of the U.S. Air Force test pilot school in 1988 and U.S. Navy test pilot of the year in 1991, Colonel Hadfield was CAPCOM for twenty-five Shuttle missions and NASA’s Director of Operations in Russia. Hadfield served as Commander of the International Space Station where, while conducting a record-setting number of scientific experiments and overseeing an emergency spacewalk, he gained worldwide acclaim for his breath-taking photographs and educational videos about life in space. His music video, a zero-gravity version of David Bowie's "Space Oddity," has nearly 50 million views, and his TED talk on fear has been viewed over 10 million times. He helped create and host the National Geographic miniseries One Strange Rock, with Will Smith, and has a MasterClass on exploration. Chris Hadfield's books An Astronaut's Guide to Life on Earth, You Are Here and The Darkest Dark have been bestsellers all around the world.

Dot Marshall-Gent  worked in the emergency services for twenty years first as a police officer, then as a paramedic and finally as a fire control officer before graduating from King’s College, London as a teacher of English in her mid-forties.  She completed a M.A. in Special and Inclusive Education at the Institute of Education, London and now teaches part-time and writes mainly about educational issues.  Dot sings jazz and country music and plays guitar, banjo and piano as well as being addicted to reading mystery and crime fiction.