‘The Harvard Curse’ by Martin Chevreau. 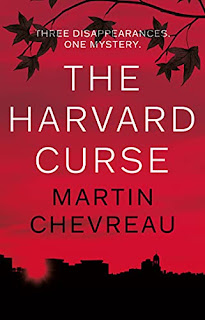 Professor Adrien Renard, a Harvard professor, and two of his students, Clementine Miller and Eveline MacDonald, vanished just before Christmas.  The newspapers and the nation were gripped by the mystery, calling it ‘The Harvard Curse’.  However, after three months of unsuccessful searching, the story has slipped out of the headlines.  And then a journalist is going over the story again and receives a phone call that piques his interest…..

At the time of his disappearance Professor Renard was already a figure of interest, having survived a car accident in which his wife Florence died and their friend, Hermione, suffered disfiguring injuries.  He was in a coma for 2 months and, as he recovered, he began drinking heavily.  He also started writing, producing three very successful novels in quick succession in the months following the accident.  He had just returned to academic work, having retained his position as head of the Department of Psychology.  Room-mates Clementine and Eveline were among his first-year students.  Eveline knew Adrien’s story and told Clementine, sparking her interest and setting in train a series of events with tragic consequences.

This is the author’s first novel and is a tense and gripping story, told from the viewpoints of Adrien, Hermione, Clementine, and Adrien’s friend and colleague, Archie.  Against the backdrop of the university campus, the reader is given different versions of the events, with twists and turns that provide a series of possible solutions to the mystery.
------
Reviewer: Jo Hesslewood.

Martin Chevreau has worked in Spain, Brussels and the UK. Martin is currently finishing his degree in Politics and Spanish at the University of Surrey and lives in Ealing.