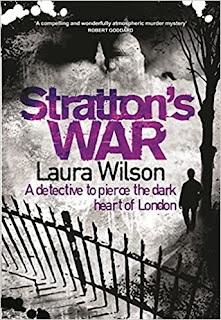 Published by Orion,
7 February 2008.
ISBN 978-0-7528 7623-8 (HB) DI Ted Stratton is a policeman working in central London in 1940. He is married to Jenny. They have two children who have been sent out of London for safety.  His home life is happy, apart from the constant entreaties from his wife, which he is beginning to dread, to bring back the children from the country as she misses them. His extended family leave something to be desired, but we all have the same problems in this area.

He is called to investigate the death of silent screen star Mable Morgan who has been found dead impaled on railing outside her flat. The verdict is suicide, but Ted is not so sure, and against his superior’s advice he starts asking questions.

On the other side of the tracks we meet Diana Calthrop, a tall elegant blonde who is recruited into MI5 working with senior official Sir Neville Apse. Diana meets handsome Claude Ventriss and against her better judgement and her colleagues advice, is attracted by Claude.  Diana is on sticky ground all round, she is married to Guy, who is serving abroad, but unlike Ted Stratton her marriage is not happy, and with her home life scrutinised by her mother-in-law, and a job that is by its very nature secretive, she really has no one she can trust.

As Ted delves further into the circumstances surrounding the death of Mable Morgan, he finds links to the criminal underworld that in turn lead him to Diana’s secret world, and thus their paths cross.

Laura Wilson was brought up in London. She has degrees in English literature from Somerville College, Oxford, and UC. She has worked as a teacher and editor of non-fiction. Many of her novels have either a historical setting or a distinct historical connection, and often have split or dual narratives.