‘The Inspector and Silence’ by Hakan Nesser 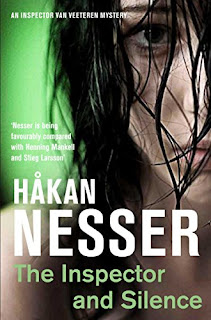 Sergeant Merwin Kluuge is currently in charge in Sorbinowo - the Chief of Police Malijsen having decided to take a holiday. Kluuge duties over the last three year have amounted to little more than sending off monthly reports. He is therefore looking forward to a peaceful time, the sun is shinning, he has moved into a new house with his wife Deborah who is expecting their first child. For Kluuge all is well with the world until that is he receives a telephone call telling him that a girl is missing from ‘The Pure Life Camp’ at Waldingen. Kluuge telephones the camp at Waldingen and is informed that no one is missing from the camp. But his relief is short-lived when a couple of days later a second call informs him that if he doesn’t do something the newspapers will be informed.  Chief Malijsen has left a contact name for emergencies and so Kluuge contacts Inspector Van Veeteren

Inspector Van Veeteren is in an introspective mood - approaching sixty, and contemplating a change in his life, he has just booked a holiday starting in two weeks time. An investigation in the lovely lake-town of Sorbinowo should coast him up to his holiday nicely.

‘The Pure Life’ is a religious sect buried deep in the forested area of Sorbinowo. Apart from three women who appear to be the hand-maidens of the Priest-like leader of the sect Oscar Yellineck, the other inmates are young girls aged between eleven and fourteen. When interviewed by Van Veeteren Oscar Yellineck is adamant that no one is missing. Van Veeteren whose intuition is on high alert, books into a nearby hotel.

The discovery of the body of a young girl raped and strangled has Van Veeteren and the police force crawling all over the sect, but Oscar Yellineck is nowhere to be found and the entire members of the sect refuse to speak. In all interviews Van Veeteren meets a wall of silence.

Although a serious subject and an intriguing mystery, this is a book rich in humour. My knowledge of Swedish writers has previously been limited to Henning Mankell, and I have listened on unabridged audio to all but the last two books written by him, and whilst they are intricate and well-crafted mysteries suiting my mood particularly when I was travelling back from somewhere late at night - all darkness and waving trees, humorous they are not. I wasn’t sure if any humour had been lost in translation or if it was the dour style of Swedish mystery writers. But reading Hakan Nesser has redressed the balance, clearly Swedish people have a wonderful sense of humour. And I applaud the translator Laurie Thompson as I felt the rhythm of the book and the marvellous character of Van Veeteren whose introspective musings were the greater part of the story.

I read that Hakan Nesser has received awards for many of his books, I am only sorry that I have not yet read them all, but I will be addressing that immediately. Highly recommended.
-----
Reviewer: Lizzie Hayes

Håkan Nesser was awarded the 1993 Swedish Crime Writers' Academy Prize for new authors for his novel The Mind's Eye (published in Sweden as The Wide-Mesh Net); he received the best novel award in 1994 for Borkmann's Point and in 1996 for Woman with Birthmark. In 1999 he was awarded the Crime Writers of Scandinavia's Glass Key Award for the best crime novel of the year for Carambole. His novels have been published to acclaim in nine countries. Nesser was born in Sweden in 1950, where he lives with his wife and two sons.
Posted by Lizzie at 13:40