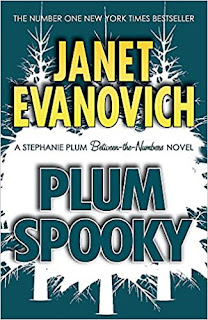 This is a somewhat fey entrant into the Stephanie Plum, Bounty Hunter adventures. Although not in the number series, it contains all the usual suspects, but with different emphasis.  Both Morelli and Ranger are around but off-stage as it were.  Enter Diesel, who appears to have magic powers, and is on the track of a cousin, bad – and I mean very bad – Wulf. Diesel takes up residence at Stephanie’s – an old friend?

Meanwhile Stephanie is on the trail of Martin Munch, whom Vinnie bonded and has skipped big time. Vinnie is out a lot of money, and needs Munch brought in quickly before his father in-law and investor, Harry the Hammer does him (Vinnie) some serious damage.

Stephanie finds herself in loco parentis of a monkey called Carl. Lulu, a large lady who wears her clothes two sizes too small, is not enamored of monkeys.  Much hilarity ensues.

Both Martin and Wulf lead Diesel and Stephanie into the Barrens, an area frequented by the Jersey Devil, who by all accounts one wants to steer clear of. While Wulf is seeking world domination, Munch is after getting Stephanie naked – well any woman actually.  To get him to assist in the world domination and to keep him from being distracted, Wulf agrees to capture Stephanie as a birthday cake for Munch.

It’s fun but in my view comes more under the category of fantasy than crime fiction. People disappearing in a puff of smoke are not your everyday occurrence, although Diesel says it quite easy once you get the hang of it.

You do need to be a Stephanie Plum fan to enjoy this book, but there are as ever some great moments where you have to put the book down to wipe your eyes from laughing.
------
Reviewer: Lizzie Hayes

Janet Evanovich was born in 1943. She grew up in New Jersey, but now lives in Hampshire. She is the No. 1 bestselling author of the Stephanie Plum novels, the Lizzy and Diesel series, as well as the Fox & O’Hare series with Lee Goldberg. She has won several major crime fiction awards including the Dilys Award and Silver Dagger. She is on Twitter - @janetevanovich