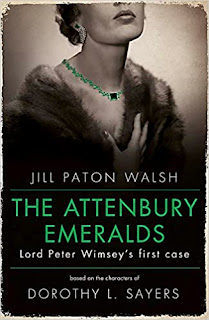 Although, the story of the emeralds is set in 1921, it rears its head again in the current day that being 1951, when the present Lord Attenbury needs to sell the emeralds for Estate duty, and there is now a problem with their provenance. So, Peter is plunged back into duplicity and murder as he retraces the path of the emeralds over the last thirty years.

Apart from an engrossing mystery, Jilll Paton Walsh does justice to the post war period and the class changes that the war had set in motion.

There are some surprising twists and a satisfying conclusion. Recommended.
------
Reviewer: Lizzie Hayes

Jill Paton Walsh (937-2020) was born Gillian Bliss in London on 29 April 1937. She was educated at St. Michael's Convent, North Finchley, and at St. Anne's College, Oxford. From 1959 to 1962 she taught English at Enfield Girls' Grammar School. In 1961 she married Anthony Paton Walsh. She held an Arts Council Creative Writing Fellowship in 1976-8. From 1978 to 1986, was Gertrude Clarke Whittall lecturer at the Library of Congress in 1978, was a Whitbread Prize judge in 1984, was Chairman of the Cambridge Book Association from 1987 to 1989, and has served on the management committee of the Society of Authors. In 1996 she received the CBE for services to literature and was elected a fellow of the Royal Society of Literature.
Posted by Lizzie at 20:08