‘A Dark and Broken Heart’ by R.J. Ellory 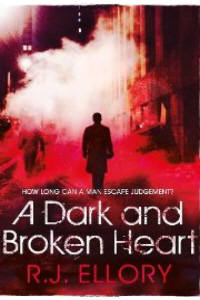 This is the first book I have read by this author and find it amazing that a Birmingham-born Englishman should write thrillers based in the United States and written in the slick and rapid style of an American story-teller. But he has certainly been very successful as he is now a multi-award winning crime writer.  His work is an acquired taste and not for everyone, but for lovers of fast-moving and dramatic crime stories based in the USA, this book is a must.

In the opening chapters, we meet American detective Vincent Madigan who is a heavy drinker and pill-popper with two ex-wives, a mistress and kids he loves but seldom sees. His job as a detective in the New York Police Department is his life but, surprisingly, we discover he is heavily in debt to an evil and ruthless gangster called Santia, who is also a loan shark. Madigan decides to rob Santia to get the money to pay off his debt to him. He enlists the help of three villains for the heist, but a massacre occurs in which the couriers carrying the money are killed - one of whom is a relative of the evil Santia. Madigan then shoots his three henchmen and takes all the money for himself, faking a dispute between the three men over the cash.

When another detective works out that there was a fourth man at the murder scene, Madigan is in a position, as a cop, to follow the progress of this investigation and try to scupper the efforts of the other detective to get to the truth. He also knows that killing Santia’s nephew means certain death for him, if and when the gangster discovers the killer’s identity.

The plot becomes very complicated after this. The story moves fast as the plot develops with ever more problems for the rogue cop until the denouement which should have surprised me but did not. Madigan is not a sympathetic character but he does have a conscience about this lifestyle and the author has cleverly created a screwed-up character that some readers may find appealing.

This is a very long novel, but it is definitely a page-turner. Violent, fast-moving, with clever surprises, it keeps the reader guessing all the way through. An ideal thriller for readers who enjoy macho American cop dramas.
------
Reviewer: Edna Jones

Roger Jon Ellory was born in Birmingham, England in June of 1965.  In 2001 Roger took an office-based job for the first time in his life.  He was shown how to use a computer, how to create a word document, and decided to use his lunch hours to start writing.  Between August 2001 and January 2002, he wrote three books, the second of which was called Candlemoth.  This was purchased by Orion and published in 2003. Candlemoth was translated into German, Dutch and Italian, and has now also been purchased for translation into Swedish, French and several other languages. As of 2012, RJ Ellory had published ten novels, the most recent entitled A Dark and Broken Heart.

Edna Jones has been writing novels, articles, book reviews and short stories for some years. Using the pseudonym Clare Dawson for crime novels and short stories, a few other pseudonyms had been used for romantic fiction etc. Born in the West Midlands she has had a variety of jobs, is now retired and lives in Cambridgeshire. She has had two crime novels published (one as an e-book) and several short stories in various anthologies and magazines here and abroad. Single. As well as reading, enjoys outdoor life, travel, and crosswords.
Posted by Lizzie at 12:25