‘The Genesis Inquiry' by Olly Jarvis 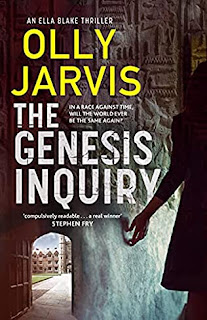 Sometimes a crime novel is just a crime novel. But sometimes it can start out as just that – and all of a sudden you realize it’s turned into something more.

The Genesis Inquiry starts out as a straightforward investigation into a missing person case which has baffled the local police. Matthew Shepherd is an eccentric polymath, and an academic at a prestigious Cambridge college. His area of research is hard to define; his interests are eclectic, and his unconventional personality and general demeanour have never encouraged friendship or co-operation with his fellow academics. And Matthew has been missing without trace for several weeks.

Enter Ella Blake, at one time an eminent and extremely able barrister, now slowly recovering from a breakdown in the wake of her husband’s tragic death. She is persuaded to come out of self-imposed retirement to undertake an inquiry into Matthew’s disappearance. Ella has her own reasons for accepting the job, not least an attempt to reconcile with her estranged daughter Lizzie who is herself at university in Cambridge.

The investigation soon starts to develop complications. The police don’t prove exactly co-operative. There are links to unlikely and unexpected people and organizations. And then people start dying. Soon Ella, Lizzie, Lizzie’s friend Jay who is an IT whizz, and Broady, an American detective find themselves embroiled in a race to discover exactly what Matthew Shepherd was researching, and the wider implications and uses of the patterns he created out of what he had discovered.

The novel moves on from missing person inquiry into a fast-paced adventure with a strong cast of good guys and bad guys – and with the possible exception of our four heroes, it’s sometimes hard to know who is on which side. Ella herself is a damaged soul, but stronger than she knows. Lizzie and Jay both have the single-minded enthusiasm and unthinking courage of youth. Broady is solid and down-to-earth, but with his own softer and more spiritual side.

The action veers away from Cambridge and its surroundings to the middle east, all in locations which are almost tangibly realized, all the way to a final showdown in what must be one of the undiscovered wonders of the world and is actually a real place.

It’s well written, pacy and puts forward some intriguing ideas – and one thing is guaranteed: read this book and
you’ll never look at comets in the same way again.
------
Reviewer: Lynne Patrick

Olly Jarvis is a writer and criminal defence barrister, originally from London but now working in Manchester. Drawing on his experiences, he writes both fiction and non-fiction with a particular understanding of the pressures and excitement of life in the courtroom. He wrote highly acclaimed Radio 4 drama Judgement, exploring a barrister’s thought processes whilst cross-examining a rape victim. Olly has two children and lives in Cheshire.