‘Too Much Water by L C Tyler 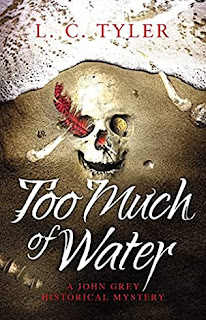 In this the seventh book in the series featuring John Grey, lawyer and former spy, now Justice of the Peace, we find ourselves in the year 1670 in Eastwold, once one of the most important seaports in England. Now, unfortunately, owing to coastal erosion, most of it has fallen into the sea, and only a handful of houses remain.

Our story opens on a rainy day in March when John Grey and his playwright wife Aminta are travelling to Eastwold in Suffolk at the behest of the Sherriff, to investigate the death of Admiral Sir Robert Digges. The current magistrate being Digby Digges, the son of the dead man, the services of another magistrate are required. The recent inquest into the death by the coroner David Larter returned a verdict of accidental death by drowning, but Digges was standing for Parliament and being a most unpopular man, possible foul play is suspected.

Despite most of Eastwold being under water, it still retains the right to send two men to Parliament, and wealthy men covert these profitable positions. So, the voters are looking forward to a rewarding time, as rich men will pay handsomely for a vote.  But to have a vote, they do have to be resident in Eastwold, and so the sale of underwater properties is experiencing a boon.

While making his enquires Grey and Aminta are staying at the home of Digby and Silvia Digges. Whilst by all reports Robert Digges was universally hated his son speaks well of his father.  As Grey commences his investigations his first port of call is to visit the Reverend George Wraith, vicar of the only remaining church, the other three having slipped into the sea. Several stories emerge of men who died unnecessarily under the command of Admiral Digges. Also the story of the local innkeeper Ezekiel Benefice, who lost a leg fighting under his command. As the Vicar says, ‘he has another leg of course, but I think he would have preferred the two.’

Gradually, the suspects mount. It seems that everyone had an axe to grind with Robert Digges, former Mayor Soloman Larter, fisherman James Tutepenny, and many others. I didn’t find many of the residents of Eastwold particularly likeable, except I quite took to Mother Catch, the local witch.  When Aminta asked if she was ever asked to curse anyone, she replied, ‘Yes, I do that. People often are much happier for knowing an enemy of theirs has been cursed. And it’s very little effort. Is there anyone you would like me to curse for you, my dear? My prices are very reasonable.’

To muddy the waters, comes the scoundrel and womaniser, Samuel Pepys, sent by his master to secure a watery seat in place of Robert Digges. As matters progress it is clear that not only is no one is prepared to assist Grey in his pursuit of the truth surrounding the death of Admiral Digges, but certain people are bent on obstructing his investigation.

Brilliantly witty, with a mystery that kept me guessing to the end.  I cannot recommend this book too highly. Give yourself a real treat. It’s worth its weight in gold for pages 167 to 169 alone.  A whole new slant on Noah and his ark.
-------
Reviewer: Lizzie Sirett

L. C. Tyler  was born in Southend, Essex, and educated at Southend High School for Boys, Jesus College Oxford and City University London. After university he joined the Civil Service and worked at the Department of the Environment in London and Hong Kong. He then moved to the British Council, where his postings included Malaysia, Thailand, Sudan and Denmark. Since returning to the UK he has lived in Sussex and London and was Chief Executive of the Royal College of Paediatrics and Child Health for eleven years. He is now a full-time writer. His first novel, The Herring Seller's Apprentice, was published by Macmillan in 2007, followed by 8 further books in the series featuring Ethelred Tressider and his agent Elsie Thirkettle. The first book in a new historical series, A Cruel Necessity, was published by Constable and Robinson in November 2014. Since then, he has published six further books in this series. The latest being Too Much Water. His latest Ethelred and Elsie is Farewell My Herring.