‘Lost on the Sea of Galilee’ by Dermod Judge. 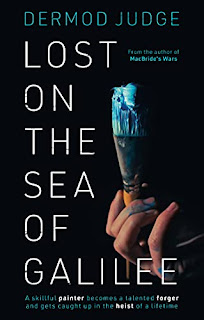 Jack Gillcrest meets his girlfriend, Grania McCann at art school in Ireland.  He is a talented artist with a particular skill in copying other artists, but is still trying to find his own original talent.  Grania is already focused on her own work.  Jack does, however, have a source of income from altering photographs into something with a resale value and it is this that draws him to theft and forgery, a criminal conviction and a short jail sentence.

On leaving jail he decides to go to London, where he gets a job in an advertising agency and acquires a variety of useful skills.  Grania joins him there and works on developing her own considerable artistic talents - she encourages him, without a great deal of success, to do likewise.  Jack continues to produce high-quality forgeries for substantial financial reward.  Eventually, he becomes involved in major plot to steal a number of paintings, including a Rembrandt (the picture of the title) from a small art gallery in the USA.  A key part of the crime requires Jack to copy the Rembrandt painting.  He is captivated by the painting and the way in which Rembrandt has told the story and becomes totally involved in the forgery.  His version is amazing, but the consequences have an element of tragedy.

The robbery is based on the actual theft of the only seascape known to have been painted by Rembrandt, which was stolen from the Isabella Gardner Museum in 1990 and has yet to be recovered.

As the painting becomes the centre of Jack’s reality, the reader sees Jack’s obsession and the results of that obsession.  The characters and the descriptions of the world in which they operate are interesting and the story itself looks at the clash that can occur between artistic integrity and the need to earn a living, the lure of the possibility of big money, and the desire to possess even a stolen masterpiece.

The book also has a section giving links to information about the artworks mentioned in the story.
------
Receiver: Jo Hesselwood

Other books by this author:  McBride’s Wars, A Healing Place, Clash, Two Jam Jars for the Manor, Bopping in Ballymolloy 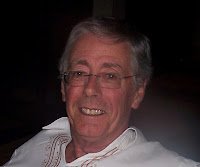 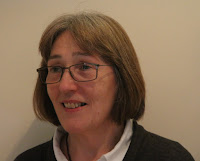 Jo Hesslewood.  Crime fiction has been my favourite reading material since as a teenager I first spotted Agatha Christie on the library bookshelves.  For twenty-five years the commute to and from London provided plenty of reading time.  I am fortunate to live in Cambridge, where my local crime fiction book club, Crimecrackers, meets at Heffers Bookshop .  I enjoy attending crime fiction events and currently organise events for the Margery Allingham Society.
Posted by Lizzie at 15:55