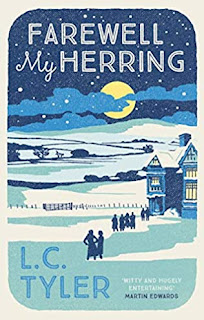 The story opens as mid-list author Ethelred Tressider and his agent chocaholic Elsie Thirkettle travel to Fell Hall, a remote location in the rugged countryside in the north of England, where they have been invited to lecture on a creative writing course. The final leg of their journey is by taxi and their spirits are not raised by the driver’s comments on the locality.’ No phone signal after Butterthwaite, a village we passed three miles back.  Not that you can call it a village, school closed 1911, pub closed 1963. Now just a farm and a row of cottages. A man vanished without trace, a year or two back.’ His parting comment ‘I think that you have just made it in time, another hour and there’ll be a couple of inches of snow.


Welcomed by the course director Wendy Idsworth, they are directed to their rooms. To Ethelred ‘You’re in Ripon– a small single room but adequate for a short stay’. To Elsie, ‘as requested, you are in in the Malham suite, you will find it very comfortable’.  Taxed by Ethelred as to how she had acquired such a comfortable billet, Elsie, who always put Elsie first, sapped back ‘Forward thinking Ethelred - have I ever explained the Internet to you?

Later they meet the other two tutors, writers Jasper Lavant and Hal Compton, and two of the participants Claire and Fliss who have mistakenly arrived a day early much to the annoyance of the efficient Wendy, who does not hide her irritation, telling them to stay out of the way until dinner. Elsie remarks to Ethelread, ‘I’d employ her. She won’t let unimportant things like people or common decency stop her meeting her targets.  Over dinner served by Jenny, Wendy’s general dogsbody, there is much literary discussion about their books from the established authors, and from Claire an aspiring writer, who is partway through her first book.

Heavy snow overnight results in the road to Fell Hall being impassable and thus the early arrivals are isolated from the outside world. Whilst debating whether to start the course with just two participants, it being unlikely that anyone else will make it through the snow, it becomes apparent that they are one person missing.  The remining party search the house and a body is found.

With no contact with the outside world and therefore no way of summoning the police. Ethelred and Elsie decide to track down the killer themselves. As with no idea of motive, which one of them could be next?

The story is told in the first person by Ethelred and Elsie in alternating chapters.  Their approaches to interrogation are different – Elsie adopting an American approach favouring a good cop, bad cop scenario, whilst Ethelred is just, Ethelred

As with all the previous eight books in this series the witty dialogue and humour is wonderful, but in no way detracts from the cleverly constructed plot, which had me foxed up the end. But the clues are there if you can suss them out.  As you would expect if you are as I am, a devotee of this series, chocolate will play a part - in this book 16 chocolate mousses.

There are many secrets to be uncovered before the mystery is solved, and the ends are tied up satisfactorily.  An enjoyable and intriguing read that is most highly recommended.
------
Reviewer: Lizzie Sirett

L. C. Tyler was born in Southend, Essex, and educated at Southend High School for Boys, Jesus College Oxford and City University London. After university he joined the Civil Service and worked at the Department of the Environment in London and Hong Kong. He then moved to the British Council, where his postings included Malaysia, Thailand, Sudan and Denmark. Since returning to the UK he has lived in Sussex and London. He was Chief Executive of the Royal College of Paediatrics and Child Health for eleven years. He is now a full-time writer. His first novel, The Herring Seller's Apprentice, was published by Macmillan in 2007, followed by A Very Persistent Illusion, Ten Little Herrings, The Herring in the Library, Herring on the Nile, Crooked Herring, Cat among the Herrings and Herring in the Smoke. The Maltese Herring.  The first book in a new historical series, A Cruel Necessity, was published by Constable and Robinson in November 2014. Since then, he has published six further books in this series. The latest being Death of a Ship Builder.